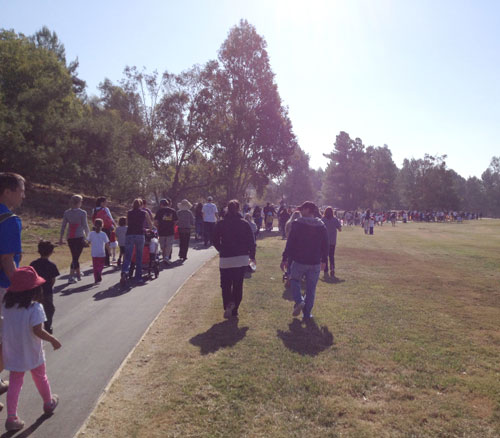 “When my son, BJ, died on July 1, 2008, it was every parent’s worst nightmare,” says Brian Hom, chair of this year’s Bay Area FARE Walk for Food Allergy. The 5K walk took place at Lake Cunningham Park’s Cypress Pavillion in San Jose on October 12.

When he was two years old, BJ was diagnosed with a peanut allergy and prescribed an EpiPen, an epinephrine auto-injector used for treating anaphylactic shock. This condition is characterized by a variety of symptoms, including dizziness and difficulty breathing. Because BJ’s reaction to peanuts had always been mild, his prescription to the EpiPen was not renewed. Shortly after his graduation from Evergreen Valley High School in San Jose, BJ and his family visited Los Cabos, Mexico. Here, BJ unknowingly ate some chocolate mousse prepared with peanuts. After he told his father his throat hurt and wanted cough drops, BJ collapsed, struggled hard to breathe, and died by the time the doctor arrived.

“If someone had raised awareness for me about food allergies, and educated us about carrying the EpiPen, there would have been a better chance of BJ being alive today,” says Hom, heartbroken by his loss.

Speaking at this year’s local FARE Walk were State Senator Jim Beall and San Jose Vice Mayor Madison Nguyen. Kyle Dine, a musician who writes songs about food allergies, performed. About 1,000 walkers and runners showed up and over $125,000 was raised.

Participating in the walk with her family was Irene Chu, leader of Team Get Allergy Wise. Both of Chu’s young sons, Ryken and Callan, have food allergies.

“These walks are important because they spread awareness about the dangers of food allergies, and they give a chance for people affected by food allergies to come together,” Chu says.

Ryken Mak, 8, belongs to a running club at his school. In addition to wearing rubber wristbands naming his allergies to dairy, peanuts, and other nuts, he also regularly carries his medication in a waist pouch. He has been trained to administer his own medication, if necessary.

“I did pretty good on my walk,” Mak says. “I’ve gotten sick from my food allergies, but I’ve never used my Auvi-Q [epinephrine auto-injector]. My mom and I check food labels all the time.”