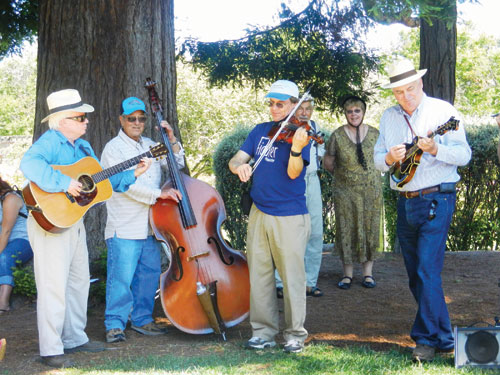 On any day, San Jose’s Rose Garden Park is filled with picnicking families and friendly gatherings. But on July 1, there was something different going on. Dozens of musicians arrived for the Santa Clara Valley Fiddler’s Association’s monthly jam.

“The organization is in it’s 39th year, going on its 40th, having been formed in 1973,” said SCVFA President Richard Brooks. “The important thing to realize is that it’s an independent fiddling association and that means we’re not affiliated with any other state or national fiddling association and the result is actually our diversity because we actually have more than fiddlers – we are any kind of acoustic, stringed instrument. We play styles of bluegrass, old time, country, western, swing, jazz, Celtic – which is Irish and Scottish, Scandinavian, Norwegian, Swedish, and Danish…You’ll see all ages of folks. Our members range in age from five to 90 – over 90. We have abilities and experience from beginning to professional.”

Groups of musicians, ranging in size from five to 15, gathered in the park around 1 p.m. and started playing. “They’ll go around in a circle – everybody choosing a tune,” said SCVFA board member Charlotte Prater. “Now if the tune chosen is one that somebody in the group doesn’t like, doesn’t know, and doesn’t want to listen to, they’ll walk away and join another group. That’s the way it works. It’s totally informal…you just get together with friends and play music.”

Jams formed and unformed throughout the afternoon, with each circle of musicians playing songs from various musical genres. Some of the groups had vocalists to accompany the music, and often park visitors would stroll over to listen and dance to the music.

“This is one of the most fun fiddler jams, I think, because it’s in the Rose Garden,” said upright bass player Barbara Rosner. “It’s such a beautiful place and the weather is absolutely perfect right now. All the right elements are coming together. I think this genre of music is traditionally community-based and it invites all different levels of musicians. So we’ll be playing at the fiddler jam and you’ll have some young kids and they’re whaling away and then you’ll have older folks who have been playing for a long time. It just allows for all different people to get together at one time.”

Members of SCVFA have worked with each other on CDs, played gigs as a group, and gotten together for events outside of the monthly jams. “It’s family,” said Prater. “Even if you can’t remember everybody’s name.”

The fiddlers meet the first Sunday of each month from 1 p.m. to 5 p.m. at Hoover Middle School in San Jose, but in July and August the group gets out to the Rose Garden for outdoor jams. Admission to the school jams is $6 for members and $8 for non-members. Children 17 and under are free. All ages and abilities are welcome. The next jam is August 5 at Rose Garden Park. For more information visit www.fiddlers.org.

When It Comes to Growing Data Center Industry, Santa Clara Holds All the Right Cards