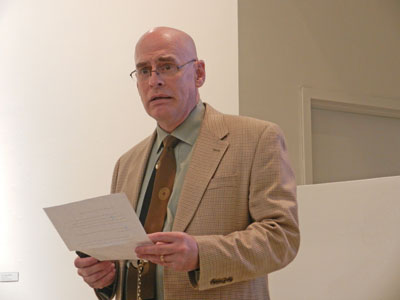 What Dreams May Come and The Matrix share one major plot point; both movies contain symbolism relating to breaching the transcendent. Robin Williams, in the former film, runs down a tunnel toward the light, while Keanu Reeves in the latter, follows a shamanic journey of reaching “heaven” and “hell” with Earth in between. For those who have attended Preston Metcalf’s lectures at the Triton Museum of Art the last three Thursdays, this completely makes sense. After using the first two weeks to explain symbols of the feminine and masculine, Metcalf utilized the January 26 lecture to delve into the Symbols of Life Beyond.

During Metcalf’s lectures there is less focus on the history of art and the general thought of what the various symbols may mean, but the sessions do spend much time explaining the true meaning behind the image. The ideas are not cultural, but elementary; they remain the same regardless of the culture or era and are from concepts learned in psychology, sociology, anthropology and archeology.

One of the paintings Metcalf showed was a cave drawing depicting a man with a non-human characteristic, falling backward next to a giant beast which happened to be impaled with a weapon. Traditional logical would suggest the image is of a man who hunted the animal and, in the hunting process, made a mistake and was gored by the animal. However, traditional logic fails us. In reality, the drawing shows a shamanic trance. “When you see human-animal hybrids that’s one of our symbols and what does that symbol mean?” said Metcalf. “It means that that is a being who is somehow connected to a spiritual world…Now this picture was shown to primary cultures all over the world and every tribal person in the 20th century that saw these pictures said, ‘well, that’s a shaman. He’s having a shamanic vision. He’s in trance. He’s falling back in a shamanic trance.’ Really? How do you know? ‘Because we do it all the time.’ Everywhere. On every continent – it doesn’t matter where. They all interpret it the same way. But what about the bison? Maybe the bison gored him? ‘No, that’s the shaman.’ The bison? ‘That’s the shaman too. Both images are of the shaman.’ Well, how do we know that’s the shaman? They said because he has a spear through it. You can’t throw a spear all the way through a bison.”

Some of the other ideas mentioned – scratches through a painting (finger fluting), handprints, and long corridors leading to a bright light – are symbols of the transcendent.

While the works of art shown during Symbols of Life Beyond were from hundreds of centuries ago, they serve as a basis for the future of the series. As the symbolism is uncovered, the lecture series will move forward and into the 20th and 21st centuries where all of these hidden-in-plain-sight images will be seen.

The series continues on February 2 with the Symbols of Life’s Journey. Lectures run from 7 p.m. to 8:30 p.m. The drop in fee is $20 per lecture. For more information visit www.tritonmuseum.org