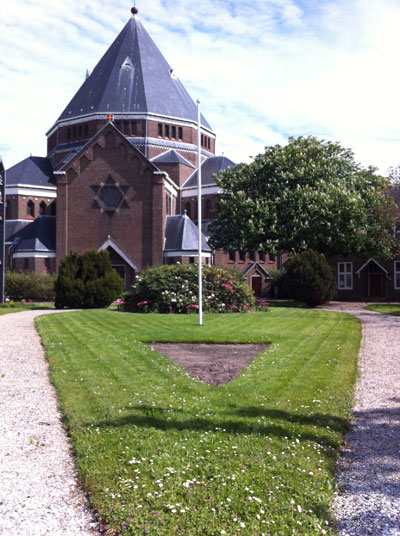 WWII U.S. Army Air Forces Staff Sergeant Donald J. Reilly from Santa Clara will be honored for heroism by a Dutch city thousands of miles from the Santa Clara Catholic Cemetery where he now rests in peace.

On September 15, a memorial honoring Reilly and his flight crew will be dedicated at Engelbewaarderskerk, the church in Lisse where Reilly’s body was once interred. Lisse, population 22,000, is an 800-year-old flower-bulb-growing center sixteen miles southwest of Amsterdam.

On September 26, 1944, nineteen-year-old Reilly was a crew member on the Jayhawk, a B-17 bomber flying from England to Osnabruk, Germany, to bomb a railway supply depot. The plane was piloted by Lt. Carl H. Gooch, and Reilly was a tail gunner.

When returning to England, the Jayhawk was hit by German navy flak. Its nose was blown off, and it crashed between the Dutch towns of Lisse and Sassenheim.

Sergeant Wilbur H. Parker was wounded and died in the crash. The other eight crewmembers jumped. Three became prisoners of war; four escaped. Reilly, who couldn’t swim, drowned in the lake in which he had landed.

Forty-two years later, in 1986, parts of the Jayhawk were unearthed in Lisse as a bulb field was being dug up. Some parts were archived at the city hall, where archivist Erwin de Mooij rediscovered them in 2001 and became caught up in researching the history of the plane and its crew.

“[Through Internet outreach], I came in contact with many of the families. Some of the stories have an emotional effect on me. These were young men fighting for our freedom,” says de Mooij in an e-mail.

“Donald was, in my eyes, still a young boy and looked very innocent. It took me eleven years to find a family member of him, but he always had something special for me,” says de Mooij. Reilly’s closest living family member is his sister’s husband, Santa Claran John O’Connell, who never met Reilly and, unfortunately, no longer has any family mementos of him.

“I wanted to dedicate this memorial to the Lt. Gooch crew, who fought for our freedom, and to remember Wilbur and Donald, who died so far from home at such young ages,” says de Mooij.

“I hope the memorial will be adopted by a nearby school. This way we will not only remember these men, but young children will learn about what they have done for us and what price some had to pay.”

The memorial honoring the Jayhawk’s crew, designed by de Mooij and his brother, Sander de Mooij, is being made and installed for free by Damo Natuursteen, a local stone works company. Harold Jansen is writing a book about the crew and the crash.

Fifteen family members of the crew are expected to attend the memorial dedication in September. Jim Riley and his wife, Dorothy, will represent Donald Reilly’s family.

“We still appreciate and honor the WWII vets in Holland, and we do our best to preserve their memories,” says de Mooij.

De Mooij’s research is ongoing. If you have information or photos of Reilly, WWII memorabilia and stories, or can help with project expenses, contact de Mooij at b17research@hotmail.com.