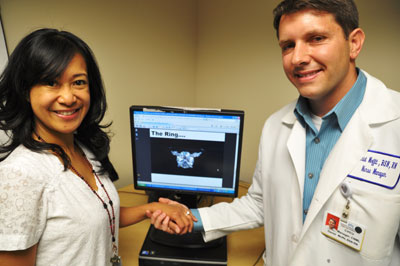 You could call it a PowerPoint proposal. Because of it, a recent leadership meeting for Kaiser Permanente Santa Clara came to a laughing and cheering stop and two young nurse managers at the medical center are now on the road to matrimony.

“We had chatted about marriage,” said Davelyn Miguel, of the SCL Neonatal Intensive Care Unit, “but this was a total surprise.”

Miguel said “yes,” of course, to Daniel Moffit’s unusual marriage proposal made at an off-site gathering at the Hyatt Regency Santa Clara. Moffit, nurse manager of the Hospital’s Cardiovascular Intensive Care Unit, had met Miguel at a similar leadership meeting in the Hyatt a year earlier in 2011.

“We’d been…..er, dating for a few months,” they both said, smiling shyly at each other.

At the 2012 leadership meeting, Moffit was on stage and winding up a complex presentation on an efficiency improvement pilot program in his unit.

During the question-and-answer session afterward, Moffit had arranged for a colleague in the audience to ask a leading question.

“He asked how someone could take my improvement program and work it into their personal life,” smiled the soft-spoken Moffit. “That was my signal to start an extra PowerPoint that would lead to my asking Davelyn to marry me.”

A bit of concern rustled through the audience. After all, it had been a long meeting with a lot of presentations.

“A few people were murmuring ‘time to go home,'” Moffit admitted, but he assured the audience in the ballroom this additional presentation wouldn’t take a lot of time.

On the screen, he outlined a “problem” with a stick figure falling down stairs: “I have fallen” the slide said.

A couple of slides later, Moffit announced a solution: “Davelyn, will you marry me?”

The meeting erupted in laughter, tears, and cheers. “People were saying, ‘what happened, what happened?'” reported Public Affairs Director Kimberly Ellis, who was among the 150 people at the Hyatt Regency that day.

Miguel was mystified. “There are all these people standing around me and cheering, and I have no idea what’s going on.”

Finally she realized Moffit had “popped the question,” and he was now showing a slide with a photo of the engagement ring.

Miguel was urged to the stage where she embraced Daniel and said “yes.” She also realized he’d invited her parents to the meeting to share the moment.

The couple will marry 8/12/12. There are no plans for a PowerPoint at the wedding. Not yet, at least.