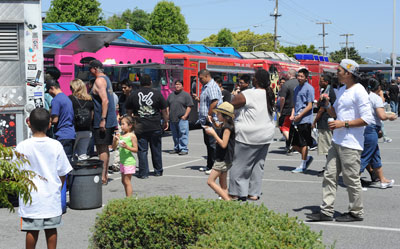 With budgets in the Santa Clara Unified School District repeatedly cut – from the state pulling money back to just plain not providing the funding promised – schools and their programs have had to resort to many different forms of fundraising. The main problem with most fundraising methods, is over-saturation. At some point in time, the people who are asked time and again to provide funding support get tired of being asked to help, no matter how worthy the cause.

Part of the over-saturation problem is that other organizations – including some that to the people who answer the knock on the door and don’t want to appear to be completely uncaring, seem to be just out to make a buck – see what the schools are doing and set up shop doing the same thing. The potential supporter is faced with several questions, such as “Is this person at my door, who claims to be from the local school really from the local school?” or “This sounds like a worthwhile thing to support, but I already get all the magazines and newspapers I need, so how do I politely turn them down?” Bake sales are also put on, and just as with magazines and newspaper subscriptions, there are only so many packages of cookie dough, cookies, delectable desserts, pretzels, frozen foods and kitchen utensils that one person can purchase over the course of the year.

Faced with the problem of how to raise badly-needed funds requires a different perspective. One of those innovations took place at Wilcox High School in Santa Clara on Sunday, May 6. From 11:30am until 3:30pm, this new method of fund raising was on display for anyone in the community to give support and enjoy themselves at time same time. It was a Food Truck Rally sponsored by Word on the Str3Eatz. The Food Truck Rally also had a special meaning to the organizers because they graduated from Wilcox themselves. Word on the Str3Eatz’s mission is “Helping support our Local schools & community by coming up with creative ideas for fundraising using the hottest Street foods & Best Eats in the Bay Area!”

With a total of nine food trucks – eight savory trucks that offered meals – and one sweet – a truck that offered dessert -$850 was raised from the Food Trucks alone, to help Wilcox Softball. Wilcox advertised the event and got the word out as did Word on the Str3Eatz and the food trucks themselves. Each truck has a significant following and they made their numbers known as several hundred people met, ate, talked and enjoyed the sun and great food, all while helping a good cause. Participating in the Rally were MoGoBBQ (www.MoGoBBQ.com), The Dough Truck (www.facebook.com/TheDoughTruck), WeSushi (www.WeSushi.net), Forbitten City (www.ForbittenCity.com), Whisk on Wheels (www.facebook.com/whiskonwheels), Itz It Hawaiianese Street Food (www.facebook.com/IZITfreshgrill), MoBowl (eatmobowl.com), Scoops (www.scoopssj.com), Takoz (www.takozmodmex.com). For more information about Word on the Str3Eatz, visit their webpage at www.facebook.com/wordonthestreeats.