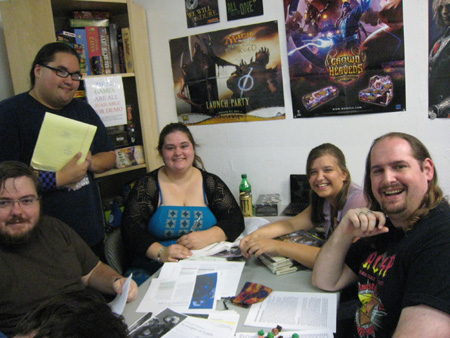 There has been a theft. We must channel ourselves into the role of fighters, magic users, wizards, and priests to discover the identity of the thief. Such is just one example of the many stories that you can unravel in Dungeons and Dragons, a role playing game that allows players to assume different identities as they attempt to navigate toward a medieval or mythical world to solve a problem.

“Dungeons and Dragons Encounters is a worldwide event that occurs Wednesday night, and people can play at my store at 7 p.m. if they’re interested,” says Anna Warren Cebrian, owner of Illusive Comics & Games at 2725 El Camino Real. “We also have Dungeons and Dragons meetings on Thursday nights at 6 p.m. and Sundays at 2 p.m.”

During the meeting on August 22, game players gathered at tables inside the store and engrossed themselves in the details of the game.

“[Dungeons and Dragons] is about telling a story in a cooperative sense,” says Alan Hillgrove, a software engineer by day and a game master in the Dungeons and Dragons game playing group. “I tell the group what environment they’re in. Today, at that table over there, those players are on a ship.”

As a game master, Hillgrove helps to guide and narrate the story. Sometimes he facilitates dialogue among characters. Knowing the direction the story will go in, he reveals details and obstacles as the characters move along.

According to Hillgrove, the game of Dungeons and Dragons has been around for about 40 years. The game evolved from combat roles and used to focus on fighting. For example, a character would wander into a dungeon to fight a dragon. Hillgrove says that while the notion of fighting a mythical creature is one story associated with the game, Dungeons and Dragons has evolved through the years to include other kinds of environments and stories as well. Therefore, the game never gets boring.

Hannah Gravius stays busy with her job at a law firm. But she still reminisces about the fun times she had playing Dungeons and Dragons years ago while she was a student at Scripps College. Back home in the Bay Area, Gravius was relieved to find a Dungeons and Dragons game playing group here in Santa Clara.

“Dungeons and Dragons gives you a chance to explore reacting to different situations,” Gravius says. “Something really satisfying about playing Dungeons and Dragons is being able to figure out a difficult puzzle or winning a really tough battle. It’s even more fun when you win with a group of people.”

“This is a game for anyone who likes to use their imagination,” Gravius says. “If you’re new to the game, don’t be afraid to ask questions. The other players here will be helpful. Find out as much as you can about the world you’re role playing in.”

Call (408) 985-7481 or visit http://illusivecomics.webs.com/ for more information about the store and current event calendar.