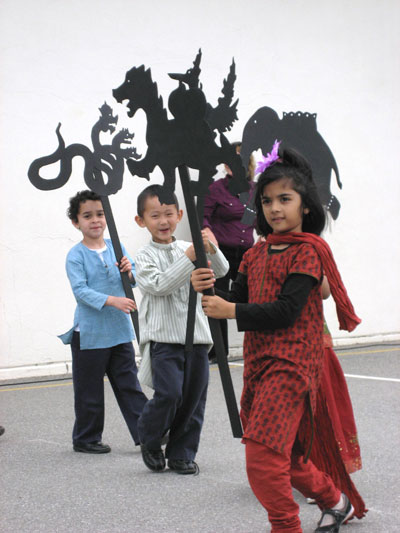 “I traveled the world today,” says Kimi De Leonibus, Public Relations Director for Delphi Academy, Santa Clara. Her world tour guides for the academy’s 2nd annual Art and Culture Day on March 30 were the academy’s 140 students from kindergarten through 8th grade, who had transformed their classrooms into countries.

Students traveled from classroom to classroom throughout the day, learning about each country from their costumed classmates. At day’s end, everyone assembled outside for songs, dances and dramatic enactments representing the culture of each of the nine countries.

“It’s a one-month project. It’s a process, and the students learn a lot of things,” says teacher Nivedita Kumar, whose 7th and 8th graders chose to explore Peru.

“I felt passionate about teaching about Kenya,” says teacher Jillian Trujillo. Her 12 kindergarten students—the boys dressed in the bright orange-red garb of Maasai warriors—jumped up and down chanting “Jambo! Jambo! (Hello! Hello!) Welcome to Kenya, our beautiful country!”

What are the chances of Trujillo’s students meeting a real Maasai warrior anytime soon? Probably about the same as winning a $656,000,000 lottery jackpot. But that’s what happened—they met a Maasai warrior while they were on a field trip to Natural Bridges State Park in Santa Cruz!

Teacher Tim Raiburn’s first graders were Down Under in Australia playing digeredoos. The students had made their four-foot-long wind instruments out of PVC pipe, decorating them colorfully and adding mouthpieces they molded out of beeswax.

“The highlight of this [school project] is that students learn so much more of the essence and the beauty of other countries by participating,” says Headmistress Mary Green. “Understanding becomes more real because of participation.”

“Teaching like this is a great contrast to just teaching to a test,” says John Schmitt, father of students Maddie and Caitlin. “It’s a great way for students to learn about the world. What’s different satisfies your curiosity. The sameness builds a human bond, empathy.”

Caitlin (10) and classmate Erica (8) were excited to be dancers in the 1970s Swedish rock group ABBA.

“We made up the whole dance by ourselves!” they both say excitedly.

“It was fun, and I learned a lot about Sweden,” says Neha (9). “They talk way different than English!”

“It’s very creative,” says 4th and 5th grade teacher Beverly Cuellar. “My class is very able. They chose to research famous Swedish people and decided by themselves how to present the information.”

“The kids learn so much about countries,” says mom Mala Iyer, who has two children at Delphi Academy. “The whole month they told us little tidbits about Kenya and Sweden.”

“My husband and I were drawn into the projects,” says Iyer. “I like to cook, so I did so for both classes. I made githeri, a Kenyan stew, and Swedish meatless balls.”

“My daughter practiced dancing at night, and I could hear my son in the bathroom practicing his lines,” says mom Ingrid Vacca.

“Delphi Academy is unique,” says De Leonibus. “Each child has individualized learning. It is not time-based education; it’s proficiency-based. Kids don’t move on until they have mastered the first part. Hands-on learning and creative activities make kids eager to learn, and the knowledge stays with them.”

The Delphi Academy, 890 Pomeroy Avenue, is part of the national Delphi Network of Schools. It is celebrating its 25th year in the Bay Area and its 16th year in Santa Clara. However, its lease is up, and beginning with its summer camp, it will move to a larger facility in Campbell.