“I’ve loved comics from the time I was a little kid,” said Dana Simpson, creator of the “Phoebe and Her Unicorn” book series during her author talk. “My parents had this book of Peanuts cartoons. I just devoured this. I would read it and think, that’s somebody’s job. You could grow up to have this as a job. You could make up stories and draw pictures.”

Simpson’s talk was one of the highlights of the Oct. 12 Santa Clara City Library Comic Con, held at Central Park Library. An estimated 8,000 visitors came. They practiced drawing, designed Harry Potter felt ties and Pokemon pom pom keychains, browsed through the vendor booths and posed for pictures with characters.

“We’re so excited to welcome everyone to our 4th annual Comic Con,” said Hilary Keith, Director of the Santa Clara City Library. “We are celebrating literature in all its forms, and we’re celebrating community.”

Also celebrated here were the perks of participating in cosplay, which usually involves dressing up as a character from a comic or a story associated with pop culture.

Shayna Danko and her husband, Sky, came dressed as Spider Gwen, a Marvel character, and Rick Sanchez from “Rick and Morty,” respectively. 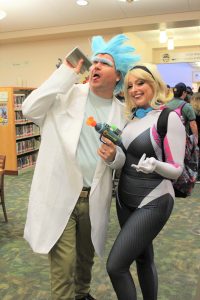 “My husband and I do cosplay because it’s a strong and creative outlet for us,” Danko said. “We get to craft and make a lot of the accessories that we wear. I work in high tech in contracts and my husband is a high tech recruiter. Doing cosplay allows us to express our creative side that we don’t normally get to do in our jobs.”

For Pat Yulo, dressing her daughter, Callista, 7, as a dark fairy came with a mother and daughter bonding experience.

“For the longest time, I’ve been trying to convince Callista to do this with me,” said Yulo, who came as Vice Admiral Holdo from “Star Wars: The Last Jedi.” “She went into my closet, and we spent Wednesday afternoon going through a variety of wigs and fairy wings to see what would fit her best. She told me what she wanted to look like. She asked me to help her with creating the look she wanted for the makeup.”

At Comic Con, Marisa Franz made a new friend, Theo Hopestill, costumed as No Face from “Spirited Away,” a Japanese animated film.

“I’m The Silent from the video game ‘Slay the Spire,’” Franz said. “The Silent is quiet and No Face is also a quiet character as well. When you go to a convention, you see people with similar interests and it’s an immediate topic of conversation to bond over. No Face and I talked about the construction of our costumes.”

Arts & Entertainment
Author Melissa McKenziePosted on November 27, 2013
Art lovers brought their lunches to the Triton Museum of Art on Nov. 13 for the museum’s first-ever Brown Bag Lunch. The new program,...

Arts & Entertainment
Author Diane AndrewsPosted on June 13, 2019
Jazz aficionados from campus and the community lounged on the lawn in front of the Louis B. Mayer Theatre at Santa Clara University (SCU)...
SPONSORED