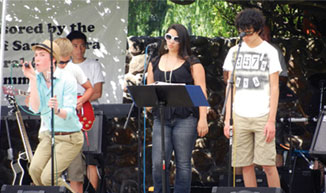 It began with Credence Clearwater Revival’s “Down on the Corner.” From there, Boy Scout Venture Crew, The 357s, played 26 additional tunes to the delight of those attending the July 14 Concerts in the Park event. The 357s hit each of the last seven decades, playing songs from the 50s (Elvis Presley’s “Jailhouse Rock”), 60s (Van Morrison’s “Brown Eyed Girl”), 70s (Queen’s “Crazy Little Thing Called Love”), 80s (Pat Benatar’s “Hit Me with Your Best Shot”), 90s (Foo Fighter’s “Everlong”), 00s (Jack’s Mannequin’s “Dark Blue”), and 10s (fun.’s “We Are Young”). And, while not everyone knew the words to every song, there was still plenty of dancing to the music. On Sunday, July 21, Plastic Onion, a Beatles Tribute Band, will play at Central Park Pavilion. All shows are from 2:30 – 4 p.m. Visit http://santaclaraca.gov/index.aspx?page=2516 for a complete lineup of artists.

Arts & Entertainment
Author Travis SwiatloPosted on December 16, 2015
One of the definitions of family is “a group of individuals living under one roof…” and the Santa Clara Players’ unquestionably showcased that on...

Arts & Entertainment
Author Melissa McKenziePosted on February 25, 2015
If someone is characterized as “short,” “chipper” or “stubborn,” it will immediately implant an image about the person being described. Although not often contemplated,...
SPONSORED