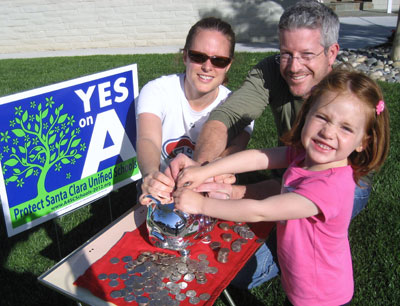 What can you buy with one shiny, silver quarter a day? Not much? Think again. For a quarter a day—actually, for just 23 cents a day—invested over a five-year period, you can buy something priceless. You can buy shares in the educational futures of the 14,609 K – 12 students and the approximately 5,000 Educational Options students, including adults with disabilities and preschool children, enrolled at the 25 school sites of Santa Clara Unified School District (SCUSD).

Plough is making phone calls to Santa Clara voters from the Measure A parcel tax office that opened March 3 next to China Stix Restaurant on El Camino Real. Well over 300 passionate community volunteers have turned out Sunday through Thursday evenings to spread the word about the need to invest in K – 12 and adult education by passing Measure A.

Measure A is a moderate parcel tax that would bring SCUSD $2.3 million annually for five years. The tax would cost homeowners approximately $7 per month—$84 per year—per parcel, for five years with a bottom-line cost of $420. While homeowners would chip in less than a quarter a day, Measure A would, nonetheless, add up to $11.5 million dollars. Seniors 65 and older could apply for an exemption from paying the parcel tax.

Perhaps you’ve already received a phone call from one of the volunteers, explaining that Measure A is part of a comprehensive plan to save SCUSD from further cuts to staffing and programs. Over the last ten years, SCUSD has lost $35 million in support from state and local property tax sources and has been forced to cut instructional days and teacher positions. Elementary classes now have 30-33 students, and secondary classes have 30-38 students.

“This has been a very well-managed district with a healthy reserve to see them through tough times. Smart decisions were made, but this is unlike any recession any of us have seen before,” says Plough.

“This [financial shortfall] is because of state budget decisions. The state is balancing the budget on the backs of our children. You want the best education possible for children, but state cuts have made it increasingly difficult to deliver a good education,” says the superintendent.

Four actions were recommended to eliminate the $8.1 million shortfall: 1) Reduce district reserves (already reduced to $5 million) by an additional $2 million; 2) cut the budget $1.5 million through additional cuts to staff and programs; 3) add five school furlough days through negotiation with unions; and 4) ask residents for a parcel tax of $2.3 million.

“To maintain the integrity and quality of our instructional programs, it became apparent to us that we needed a parcel tax,” says Superintendent Plough. “And [legally] the funds can’t be taken by Sacramento.”

An advisory committee of 20 community members, parents, and staff was formed to recommend budget cuts of $2.3 million to make if Measure A fails:

“This is a community issue. Public education is a right and responsibility of our community regardless of whether you have children in the schools,” says School Board President Elise De Young.

Measure A is a Mail-in Ballot Only Election, and the ballots, due by 8 p.m. May 8, have already been mailed to registered voters. The last day to register to vote in this election is April 23.

For online information, view www.a4scschools-2012.org; the district website, www.santaclarausd.org; and Superintendent Plough’s video presentation at http://www.youtube.com/user/SantaClaraUSD. Contact the superintendent at bplough@scusd.net or (408) 423-2005.