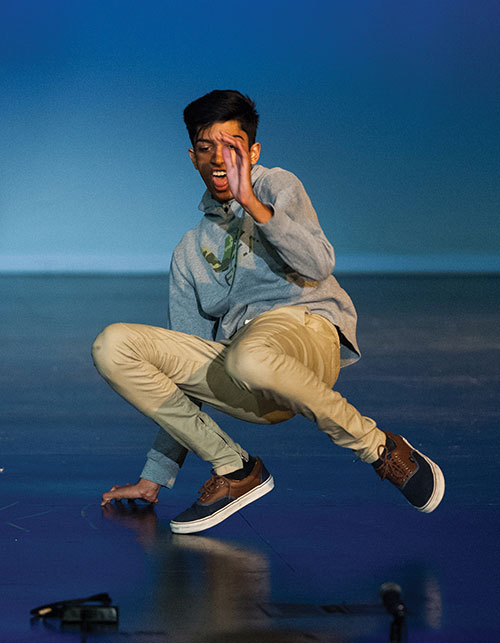 Estela Molter showed a comfortable stage presence while singing Adele’s “When We Were Young.” The trio of girls in JAMS moved with sassy synchronization to an upbeat Korean pop medley. Sarahi Lopez’s sweet voice carried Shawn Mendes’s “Like This.” David Javier gracefully break-danced to Justin Bieber’s “Company.” Noah Gallegos gave a passionate rendition of John Legend’s “Love Me Now.” With affection, Quang Le sang Ed Sheeran’s “Shape of You.” These were some of the 10 acts performed by City youth at the sixth annual Santa Clara’s Got Talent, held at the Community Recreation Center on March 18.

“At Santa Clara’s Got Talent, Santa Clara residents can showcase the talents they have,” said Jon Kawada, Santa Clara Parks & Recreation’s recreation coordinator and staff liaison to the Santa Clara Youth Commission. “The show is open to all ages but it comes with an audition.”

The first place winner of a $300 prize was Vedik Jayaraj, 17. Jayaraj’s hip hop and break-dance number came with fluid-like freestyling, fancy legwork and high-speed windmills (spinning on the ground). Songs in his dance medley included Avicii’s “My Feelings for You” and Ookay’s “Thief.”

“I’ve been dancing since I was nine,” Jayaraj said. “I learned to dance by watching YouTube videos from various channels. I feel on top of the world when I dance. On stage, I just listened to the beat and went with it. I’m going to spend some of my $300 on food and clothes.”

“This is a song I’ve been singing since I was 13-years-old,” Rodriguez said. “The song is about living your life and dancing and singing and doing everything you do with your heart. I don’t know what I’m doing with the money yet.”

Coming in at third place and leaving with a $50 prize was Stephanie Chee, 17, who hit all the high notes while smoothly performing “Art is Calling for Me” from the opera “The Enchantress.” No stranger to the stage, Chee had once performed in Carnegie Hall after winning first place in the American Prodigy Vocal Competition.

“Cool” and “amazing” were words band members used to describe their feelings about being the fan favorite.

“It feels great that we won the hearts of the people,” Matthews said.