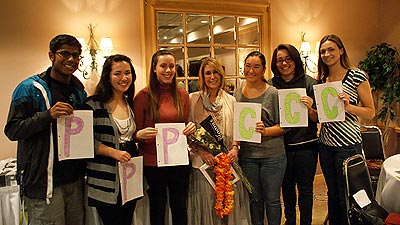 Christine Drago, a mathematics teacher at Santa Clara High School, was invited to a teacher recognition tea on May 18. Before the event, Drago was told that another teacher was getting an award and she needed to be part of the presentation. Little did Drago know that she was the one to receive the Santa Clara Unified School District’s Teacher of the Year Award.

“Andrew Ratermann, who is the President of the Santa Clara Unified School District School Board, read a statement about the Teacher of the Year,” Drago says. “He didn’t say who it was. He just talked about the qualities and the contributions of this teacher. One of the things I do for Santa Clara High School is that I write the different bell schedules. Since I’m the only one who does that, when he got to that particular part in the speech, I realized he was talking about me. I was very flattered when he said that ‘this teacher takes the students to a new level of understanding of the curriculum.'”

A bigger surprise waited for Drago when she walked up to the podium to receive her engraved award plaque and bouquet of flowers.

“I was even more surprised to see that my family and a group of my students had been invited to come,” Drago says. “They were in on it. Everyone knew that I was getting this award-my family, the school administrators, the other teachers, and some of the students.”

“Christine is phenomenal in the classroom,” says Jennifer Baldwin, vice principal of Santa Clara High School. “She’s able to teach anything to anyone at any time. She is willing to take on the toughest group of kids as well as the most academic group of kids.”

Drago has taught mathematics for a total of 20 years and has taught for 10 years at Santa Clara High School. Her students are in all grade levels. Courses she currently teaches include advanced placement courses in statistics and calculus as well as remedial levels of algebra.

“I would say that my philosophy is that I try to make mathematics as fun and relevant for my students as I can,” Drago says. “In my AP statistics class, which is my favorite class to teach, we learn about probability by playing craps, the dice game. We use little catapults to shoot plastic pigs across the room and we measure the average distance that they fly. We explore the distribution of colors in bags of M & Ms to learn how to perform a chi-squared goodness of fit test-it’s a statistical test done to test for predicted proportionality.”

Drago was born in San Francisco and attended San Francisco State University where she received a Bachelor of Science degree in mathematics with a minor in physics. She worked as a computer science engineer for 15 years before she decided to explore a second career as a mathematics teacher.

“I appreciated the award, certainly, but I am so thankful for the opportunity that I have been given at Santa Clara High School to be the very best teacher that I can be,” Drago says.

Mission College's Pister Scholar Says "This Is Just The Beginning"