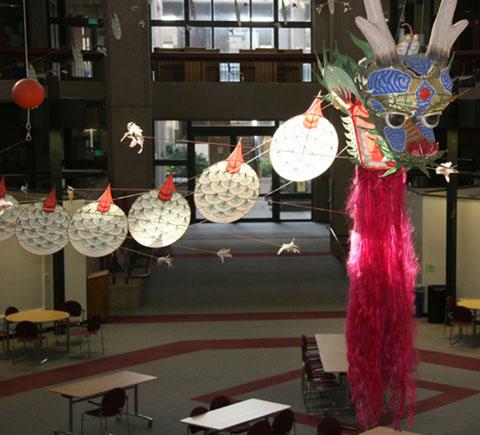 It’s not every day that a giant dragon greets visitors to Mission College’s Main Building when they step into the Center Space. But from now through March, those who come here can admire a magnificent 200 feet Chinese dragon kite suspended from the ceiling, as if floating away into the sky. This elaborate decoration acknowledges the dragon as a symbol of strength in the Chinese culture.

“[The kite] is hung, flying through Mission College’s Center Space, as a way to celebrate the Lunar New Year with our students from many Asian countries,” says Peter Anning, Director of Public Relations at Mission College.

“In 1987, we bought this kite from Weifang, China, as a tribute to our Vietnamese and Chinese student population,” says Marsha Chan, instructor of English as a Second Language at Mission College. “We hung it for the first time in 1988, so it has been hanging for every Lunar New Year since then. This year will be the 26th year that we have the kite up.”

The brightly colored kite is made of silk, bamboo, and feathers, and according to Chan, when the 200 ft kite was made, it was the longest in the world. To hang the kite, fishing lines had to be threaded through certain segments of the kite, and the lines set on hooks, and then raised until the body of the dragon reached a desired height. Chan recommends that visitors go to the second floor of the Main Building to get the best view.

“The kite is in the Main Building-it’s a three-story building that’s open in the center,” Chan says. “We have the kite zigzagging [though the Center Space]. The head of the dragon welcomes visitors near the front entrance.”

When the dragon kite gets taken down, the facilities staff will store it away until the following year’s Lunar New Year.

Before Chinese New Year, many Chinese people like to thoroughly clean their houses and hang up banners and other seasonal decorations. Chinese New Year, which fell on February 10th this year, is often celebrated over a big dinner with traditional food and pleasant conversation. Children receive red envelopes full of money and help themselves to candy from a special round tray.

Gary Gillmor Donates $250,000 to Name The Newest Building on the Mission College Campus