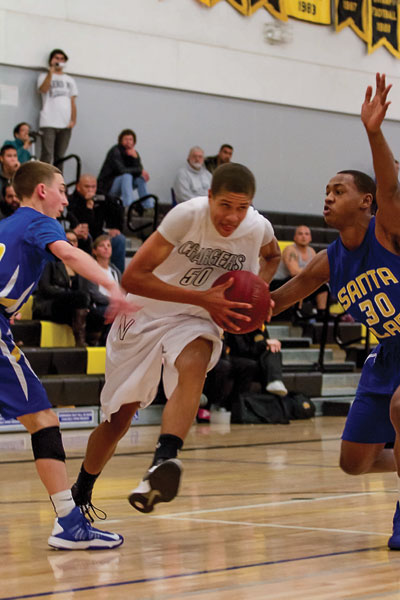 In his first season as the Wilcox Chargers’ head coach, Pat Galos hoped to get his team off on the right foot with a league-opening win over their cross-town rivals, the Santa Clara Bruins. With the Chargers having a mediocre beginning to their season, starting two freshmen, and going up against a Bruins team that has exceeded expectations early on, Wilcox had their work cut out for them. Games are not determined on paper, however, and the Chargers showed grit and determination to overcome the odds.

Noel Teccaro (’14) got Chargers’ fans to erupt as he hit a 3-pointer to put Wilcox on the board first. Santa Clara’s defense would hunker down shortly after, forcing Wilcox to shoot long jumpers that clanked off the rim. The Chargers were not deterred, though, as they crashed the boards hard, grabbing numerous offensive rebounds leading to the majority of their first quarter points coming off of second chance opportunities. “Offensive rebounding, hustle plays, taking charges, those are all things we emphasize is practice” said Galos, “But honestly these are things you can’t teach, the boys naturally play hard.”

While Wilcox’s offense showed their toughness, hustle, and unwillingness to quit on plays, their defense could not say the same in the first quarter. Their 2-3 Zone was picked apart by RJ Pamintuan (’13), as he often split the top two defenders, penetrating his way into the lane and scoring.

The first quarter ended with Wilcox up 16-10, but at the start of the second, Santa Clara went on a 4-0 run cutting the lead to two. Galos decided the best way to take Santa Clara out of their comfort zone was to employ their full court press defense, which started by putting in the bench. Delshawn Mitchell (’14) and Roland Luke (’13) began to force turnover after turnover, leading to easy buckets for Raj Singh (’14) and Rubal Singh (’14). The twins made all the difference for the Chargers as they changed, blocked and rebounded shots at the defensive end, transitioning to easy buckets at the offensive end, sending them to a 27-20 lead at halftime.

As the second half started, the Singhs sat the bench, which made the Chargers’ offense stagnant while opening the door for Pamintuan once again. As the score got tighter throughout the half, Galos quickly changed the momentum, making the substitutions necessary. “I brought the twins off the bench because I want them to be able to read the flow of the game. I don’t emphasize my starters as much as I emphasize the guys who are in at the end of the game; that’s when it counts.” While Luke made fantastic individual efforts defensively on Pamintaun, the Singhs gave the Chargers offense the boost they needed to down the mighty Bruins.

The Chargers continued hitting clutch shots on their way to a 57-44 victory over the Bruins. Be sure to catch them Friday, January 18th as they take on the Fremont Firebirds at Wilcox.

Bruins Make Most of Opportunities, Strike Past Chargers