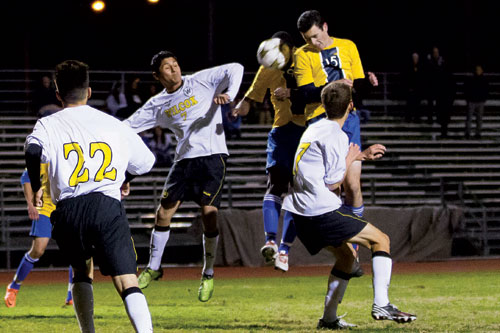 The Santa Clara Bruins and Wilcox Chargers boys’ soccer teams took to the pitch on a freezing December night last Thursday in a pre-season, cross-town rival match up. Most of the athletes came out opting to wear gloves, which accompanied their long sleeve kits to fend off the cold. It wouldn’t stop them, however, from putting on an exciting 90 minutes to see who was in best form early in the season.

During the first half, both teams had some early chances that went awry. Ankur Patel (’13), the Chargers’ keeper, was very active on crosses, coming out to snatch them out of the air before anyone could get their head on it, while also making some key saves. As the half wore on, Wilcox was clearly winning the time of possession battle, however, when the Chargers neared the box, the center backs for Santa Clara did a fantastic job of clearing it out of danger along with keeper, Derek Eszlinger (’13). While the Bruins had few chances, they made the most of their opportunities scoring off of two free kicks; the first being a swift header by Leo Hernandez (’14). The second came in striking range about 25-30 yards out when Emmanuel Hamzat (’13) planned his attack and hit a screamer to the upper right corner, giving them a solid 2-0 lead.

In the second half, Santa Clara again showed its defensive prowess when the Chargers were in goal scoring range. They were unable to hold the shut out, though, as Bryan Garcia (’14) struck a monster shot from nearly 40 yards away to bring them to within one. Despite the late goal, the Bruins finished them off with another free kick, this time taken by Justin Bermudes (’13) who bent it in the far corner to seal the victory 3-1.

Community Sports
Author Cynthia ChengPosted on December 14, 2016
Even though it was crisp and chilly on Sunday, Dec. 4, about 1,200 people showed up bright and early at Santa Clara University to...

Sports
Author Andrew BenschPosted on May 9, 2018
The Santa Clara Bruins have one more road game remaining, but they unfortunately ran into some bad luck in their home finale against the...
SPONSORED