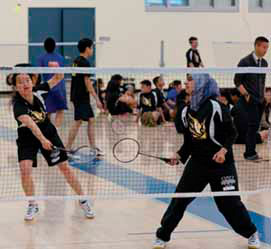 On March 26, the Santa Clara Bruins Badminton team looked to get their first win of the season against their rivals, the Wilcox Chargers. As the Bruins’ top seeded singles, Willie Choi (’13) and Deborah Santos (’13), looked to improve upon their team’s 0-2 start to the year, the hope was that their third try would be a charm.

Sadly, for the Bruins, Choi and Santos were outplayed in their matches against the top seeded singles players from Wilcox. It would be up to doubles teammates, Joe Park (’15) and Jay Huang (’13) for the boys, Yvonne Nguyen (’14) and Michelle Hang (’13) for the girls, as well as Alex Tran (’14) and Vicky Hoang’s (’14) mixed pairing to bring home the win for Santa Clara. Unfortunately, the Chargers were just too much for any of the teams, as Wilcox swept all five of last Tuesday’s top seeded matches, causing the Bruins to fall to 0-3 on the year.

Santa Clara alumni and first year Head Coach Jeff Ottey was disappointed in the losses, but kept his head high in hopes of improvements to come. “There were a couple of matches that did not end up going our way,” Ottey explained. “They [stayed] in the rally, [corrected] their mistakes during the second game and [kept] their composure. The doubles need to work on their rotations and communications, while the singles need to remember their footwork and play with more confidence.”

Ottey believes that low confidence is playing a large factor in the team’s struggles thus far, saying that “nerves may have to do with some of it, so once they gain more experience, their confidence levels should rise and result in some wins.”

Ottey went on to say that the team, especially its doubles partners, are often in flux. “The doubles teams are being shuffled around a little so players are still trying to find that chemistry and learn each other’s strengths and weaknesses. These were the rankings for the first few matches, but now we have to move players around to see if there is a better fit.”

When asked about his expectations for the year, Ottey said that progress from match to match is key and one of the greatest things he would like to see. “I expect players to work towards their individual goals so they can keep improving from previous matches. I would like to gradually increase our overall match wins, which will lead to overall team wins. The overall team wins will come as the players develop and gain more experience in playing other teams.”

Despite the weak record Santa Clara has posted thus far, the head coach does believe that he will be able to take a few of his top players compete in CCS at the end of the year. It seems as if doubles chemistry and confidence is the key to it all. The Bruins next match is Thursday, April 4th at Homestead.

Sports
Author Andrew BenschPosted on February 17, 2017
Senior night for the Wilcox girls soccer team didn’t end with a victory, but their progress this season from start to finish has been...

Sports
Author Andrew BenschPosted on July 12, 2017
After four straight days of baseball, the Santa Clara Westside 11-12 All Stars are District 44 Champions. Having lost to Los Altos on Wednesday,...

Sports
Author Andrew BenschPosted on February 20, 2019
“Do you know when Wilcox opened? 1961. Do you know what you guys just did? You just won the first CCS game in the...
SPONSORED