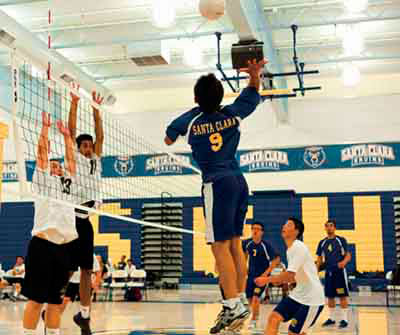 Rivalries bring out the best in every team, and with the Wilcox Chargers dominating the Santa Clara Bruins in boys volleyball for at least the last three years, there was a bit of an extra incentive for Santa Clara to win. But, it wasn’t going to be easy.

After losing the first game 25-23, Santa Clara was determined not to go out in straight sets. When Santa Clara got the ball at 3-2 in the second game, the Bruins scored four unanswered points to pull ahead 6-3 before an incredible rally ended at the hand of Wilcox junior Kenny Dipko. Wilcox’s push to even the score would be short lived as a serving error quickly returned the ball to the SCHS. Senior Roger Kim picked up an ace and three extra points before a bad set caused a side out at 10-4. Errors plagued Wilcox and between a net and double touch violation, Santa Clara quickly gained control of the game at 13-5. At 16-10, a Santa Clara net violation and block by Wilcox junior Rubal Singh got the Chargers within four, but a handful of missteps kept them from taking the lead. Wilcox would step up their game at 21-14 by crawling their way to within three (24-21). A kill and block from Singh gave Wilcox a glimpse of victory (24-23), but Santa Clara senior Connor James nailed a kill for a 25-23 win.

A final game would determine the outcome. Both teams gave their all and the score remained close throughout. When Wilcox senior Chad Anderson had control of serve at 8-7, Wilcox grabbed six unanswered points for a 13-8 lead. Santa Clara, however, answered with five points to even the score. The score fluctuated and each team held the edge for a fraction of time before Singh stepped up with two blocks to give the Chargers a 21-18 edge. Santa Clara would climb back to within one (23-24) before a passing error by Wilcox, followed by a kill by Singh, gave the Chargers a 25-24 lead. At 26-25, a pokey (ball hit with the knuckles) by Santa Clara senior Daniel Bracamonte landed on the line and the Bruins could finally claim victory.

“This is the best feeling,” said Bracamonte. “We were loud and played as a team. We couldn’t have done it without help from everybody…We played like a team and I’ve never been so proud of them. This is the first time we have won in the entire three years I’ve played [at Santa Clara].”

“They played better than they have ever played,” said first year head coach and SCHS alumnus Noel Kwalick. “They definitely stepped up and got the job done…they were so excited and confident and mentally in the game from beginning to end.”