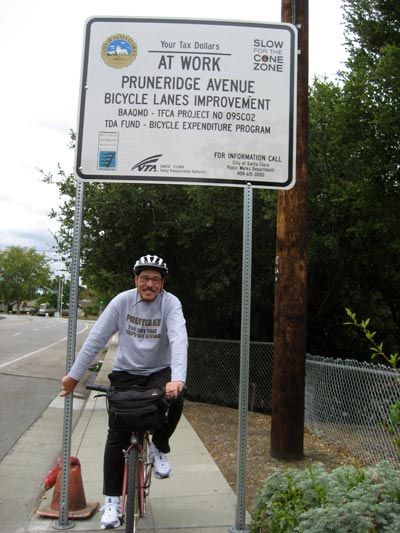 Starting his ride on Pruneridge Avenue, John Hull cycles around town about ten miles on Sunday mornings when the traffic is light.

“You can go farther than walking,” says Hull’s wife, Elfriede, whose own bicycle has been in the garage with flat tires for a couple years.

Santa Clara bicyclists and motorists should be alert to new traffic lane changes that may at first be confusing to drivers. According to Project Manager Benison Tran in the city’s Traffic Division, short stretches of two different streets are being changed from two lanes in each direction to one lane in each direction with a double left turn lane in the center of the street. Bicycle lanes will be on both sides of the street, and curb parking will be as before—on both sides of the street.

These bicycle lane improvements are along existing bike routes in two locations. One location is along Pruneridge Avenue between Pomeroy Avenue and Lawrence Expressway, and then eventually across Lawrence to Tantau Avenue in Cupertino. The second improvement is along Monroe Street between Scott Boulevard and San Tomas Expressway.

Public Safety
Author Press ReleasePosted on May 14, 2022
Coldplay will be performing at Levi’s Stadium on Sunday, May 15 at 7 p.m. Approximately 50,000 attendees are expected. Event information can be found...
SPONSORED