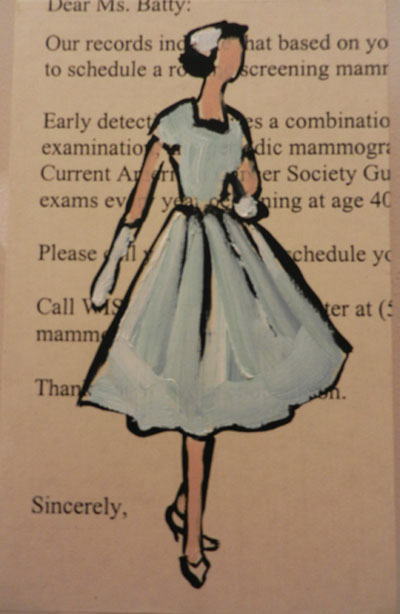 Determining the best of the best is no easy task. In many cases, art-lovers feel as if comparing still life to abstract images is similar to comparing apples to oranges. The Triton Museum of Art understands this plight, but needed to judge various forms of artistic expression in order to determine a winner for the 2011 Statewide Painting Competition and Exhibition. In one of the largest and stiffest competitions in the Triton’s history, the best entries from 2011 Statewide Painting Competition and Exhibition are on display through February 12.

According to a statement released by the Triton, hundreds of submissions were received and the victor was determined by a series of votes from the judging panel. “All entries were placed in a PowerPoint slide presentation and each juror went through the submissions separately, assigning a “yes,” “maybe,” or “no” to each slide. After each juror completed the process the results were compared. The submissions that received three “yeses” were selected for the show. Next, submissions that received two “yeses” and one “maybe” were also included in the exhibition…The resulting exhibition is diverse in styles, techniques, and ideas. Each of these components was a factor in the jurors’ decisions. Indeed, we are often asked, how can we select a show when comparing an abstraction to a photorealist still life, a pastoral landscape to an aggressive gestural painting, or a finely rendered portrait to a vase of flowers. It is in the latter of those three components – the idea of the work – in which we found our final selections. While personal tastes may differ, we found unanimity in how each of the works selected either conveyed their ideas or in how they ignited in us an unexpected contemplation. In this we were richly rewarded.”

Cuong Nguyen won the top prize and a solo show at the Triton this fall for an oil on panel entry titled Him. The painting, a straightforward portrait of a model, was incredibly realistic. Nguyen also submitted a painting of the same model, Michael. In Him, the model Michael’s (assuming Michael is the model’s actual name) green eyes stare directly at the viewer. In looking at the image for just a moment, the viewer experiences an uneasy feeling from the Big Brother quality of his eyes – they not only look directly at you, they continue to look at you from any angle you view the painting. His face, nearly expressionless, is slightly to the right of the canvas’ center. There are fine lines, showing his likely mid-30s age, around his eyes, nose and forehead and shadows ever so slightly covering his left side. Nguyen paid attention to detail in that the image looks as much like a photograph as it does a painting.

Elizabeth Barlow’s Portrait of a Marriage finished in second place. The oil on linen painting depicts two pairs of shiny, black dress shoes – a larger pair facing down and a smaller pair facing up. While this image is very lifelike and possibly a statement about how the larger, stronger person in the relationship protects the smaller, weaker one, Barlow’s other submission, Some San Francisco Ballerinas, offered equal realism and more visual appeal.

Rounding out the top three was Leslie Batty’s Illustrated Instruction for Alteration, Cutting and Sewing. Twenty drawings of 50s-era dresses were placed onto rectangle boxes. In looking closer, each dress has been painted on what appears to be letters from Batty’s doctor – letters reminding Batty of an upcoming mammogram and giving the results of the routine test – complete with artist footnotes. The “instructions” listed on the canvas are for post-masectomy and breast reconstruction surgery. Not only does Batty’s piece show a time when plastic surgery (alteration, cutting, and sewing the skin) wasn’t the norm for women, but it gives a statement about the alterations cutting and sewing that need to be done in order to remove a life-threatening medical condition from a female’s most womanly asset.

The Triton Museum of Art is at 1505 Warburton Ave. in Santa Clara. The museum is open Tuesday-Saturday 11 a.m. to 5 p.m. with extended hours to 8 p.m. on the third Thursday of the month. The Triton is open on Sundays from noon to 4 p.m. and closed Mondays. Admission is free. Visit www.tritonmuseum.org for more information.