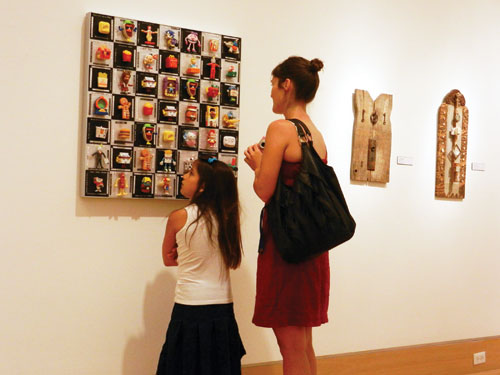 Give an artist a ball of string, scissors, adhesive and paper and they’ll create something spectacular. Set them off into the city streets and they’ll use their skills to make a piece of art out of trash. Plenty of artists use found materials within their artistic endeavors and the Triton Museum of Art’s current show, “Poetics of Disposability” proves the theory that one man’s trash, is another man’s treasure.

Each of the artists in the show has used discarded objects like pencils, balls, old CDs, and Happy Meal toys and reassembled them to make new artwork that is, according to the Triton’s website, “relevant to the state of our contemporary affairs and concerns.”

One of the most haunting works comes from artist Renee Billingslea. Billingslea made 10 hats, each with a specific saying, for her “Lynching Onlooker Hats” piece. In creating the feel of old-fashioned lynching events, where people would dress up and attend like it was a Sunday play, one of the hats says, “Daddy let me watch from his shoulders,” while another reads, “I packed our picnic.” Additional sayings include statements like, “I smell his burning flesh,” and “I hear him screaming.”

Billingslea again recreated those horrible times in American history with her fabric, photographs, and ring piece, “The Lynching Quit.” Intertwined within random pieces of fabric are photographs of men who have been hanged and lynch mobs on the attack.

But not all of Billingslea’s contributions to the show deal with America’s horrific past. Her “Pencil Shoes” are just that – shoes created from pencil tips and eraser ends. The sharpened graphite edges, poke out from a slipper-like base, while the worn rubber pencil bottoms are arranged in a circular design that would sit on top of the wearer’s foot.

Marianne Lettieri also used pencils in her “Illumination” piece. The mixed media sculpture, uses the writing utensil almost like a beard on a paper-covered head. Lettieri uses part of a phoropter (the instrument that determines one’s eyeglass prescription) as glasses. The entire head sits inside a wooden box.

Most of the entries in “Poetics of Disposability” are unsettling to the viewer. Even the happiest-looking pieces, like John Kuzich’s “Happy Meal,” are not so joyful. “Happy Meal” contains 49 kid’s meal toys from various fast food chains. On first glance, it’s a nostalgic trip back to childhood, but Kuzich has added remarks and sayings around each toy. One of them reads, “I need a hand – not a handout,” while another says, “desperATE NEED FOOD.” Others are comical, like the ones saying, “Need money to get DRUNK!” and “Food puts me in the mood,” but general sense of the piece is that Happy Meals are not happiness.

Artists Jon Kerpel, Jeff Owen, Robert Ray, and Virginia Ray are also exhibitors in the show that runs through September 9.

The Triton Museum of Art is at 1505 Warburton Avenue in Santa Clara and is open Tuesday through Sunday. For additional information visit www.tritonmuseum.org.

Musicians Jackie Gage and The JurassiC

Concerts in the Park - Cool Under Pressure