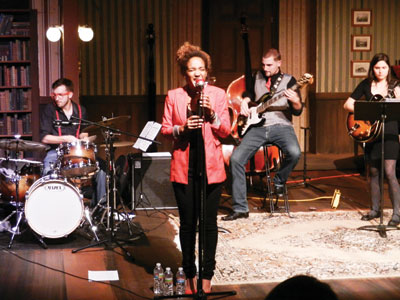 Instrumental music begins as singer-songwriter Jackie Gage approaches a modern microphone designed to bring back memories of yesteryears. The singer’s red blazer and matching high-heeled shoes blend perfectly with the microphone’s red accents. And, her dark, sun-kissed tresses are styled in a messy updo. Her band, The JurassiC (formerly The Jazz Cartel), also appears somewhat overdressed for a Sunday afternoon show. But, as soon as Gage starts singing it becomes clear she’s about an image – a melding of the golden age of jazz and modern renderings of the genre.

As she croons into the microphone, Gage’s buttery voice is reminiscent of the jazz singers in the 1930s and 1940s, but the band’s tempo and sound quickly put the new spin on the classic style. It’s simply a soothing symphony as there are plenty of instrumental breakdowns throughout the set to showcase the individual abilities of Gage’s four-piece band (Dillon Vado, Janelle Roccaforte, Danny Gerz, and Jeff Hanson)

“I love jazz but I’m realizing more and more than people who love jazz are limited so I’m hoping to branch out into an uptempo, funky, R&B groove,” said Gage. “I will always do jazz on the side though. I sing at 71 St. Peter in downtown San Jose once a month.”

“I want to be known as an original fusion artist,” she continued. “There’s this girl named Mara Hruby. She’s a local Oakland artist, and I realized through her that there’s a lack of inspirationally fun and smooth music.” Like Hruby, Gage wants to create unique and interesting music that appeals to the masses.

With original songs, and a handful of mostly unrecognizable covers, The Santa Clara University junior has been pounding the pavement and is eager to let Santa Clara and the surrounding cities know she’s here.

When it comes to writing, Gage tends to get inspired at the most inopportune moments. “The worst is when it comes to me in bed and I have nothing to write it down with,” said Gage. “I have to remember the words and melody since they always come together.”

“There’s also a clock in my room and I can hear it tick. It often sets the pace of some of my songs – not that they’re all the same, but there is some consistency.”

Of all the songs she’s written, “This is How It’s Done” holds the most meaning. “It took me almost a year to make it sound how it does,” said Gage. “I was thinking of the melody when I was going through a tough time and it’s the song I wanted to form the band around. I never want to leave that behind.”

With a silky voice and soulful sound, JG and the JC may have a shot at reaching their dream.

For information on Jackie Gage and the JurassiC, the upcoming August 12 show at the San Jose Jazz Summer Fest, or to download their music (although the recorded tracks do them little justice), visit http://jackiegage.bandcamp.com/ or http://jackiegage.org.