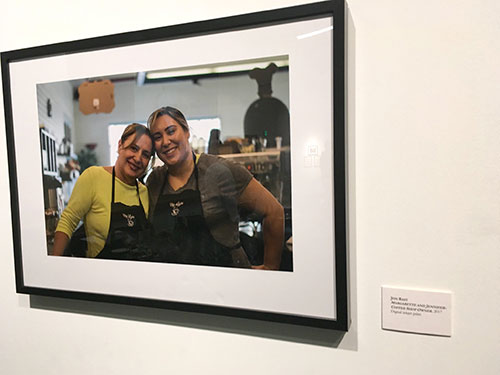 Dan Alling, a sophomore at Santa Clara University, took Lecturer Renee Billingslea’s course in Exploring Society Through Photography, which came with a requirement called Experiential Learning for Social Justice (ELSJ). Alling’s experiential learning involved spending time with the Santa Clara Fire Department. In Alling’s photograph “Zach McGhie-Firefighter,” the firefighter was talking to a little girl and showing a community connection being formed. Until June 17, this photograph and other work will be shown at Santa Clara University’s de Saisset Museum in “A Geography of Hope,” an exhibit featuring student photography and creative writing.

“Mentored and inspired by the work of Frank Sinatra Scholar-Artist-in-Residence Anna Deavere Smith, and responding to one another’s artwork and their community-based learning programs, the students involved in these courses created the photography, poems, and other reflections that comprise this multifaceted exhibition,” said in a press release from Santa Clara University.

“I want others to know it’s hard to be a family-owned business especially when you have big competitors like Starbucks,” Rast said. “Margarette and Jennifer told me that they have struggled but they have still come out on top. In the picture it looks like they are above everything. The picture captures their perseverance and comradery and the sacrifices they made to make sure the business stays afloat. It’s a picture of triumph.”

Also part of the exhibit were work from Creative Writing and Social Justice, an ELSJ course taught by Senior Lecturer Claudia McIsaac. According to Sharleen Cabal, junior, students here were assigned to write poems based on chosen images from Billingslea’s photography class. These poems are called ekphrastic poems, written in response to a photograph in the form of an interpretation or narration of the image.

“I don’t know the subjects in the photo personally,” said Cabal of her poem “The Alien with Pink Hair,” which was inspired by a photograph of two embracing women. “But my poem is an interpretation of what the image represents to me. I saw two individuals finding a sense of belonging in what would be considered a marginalized community. I believe the two have a romantic relationship.”

The poem “And Even After I Gave You Life,” written by Lindsey Mandell, junior, was inspired by a photograph of two women holding a pair of umbrellas resembling breasts at a Women’s March.

“A Cabbage Adage,” written by Riley O’Connell, sophomore, was not inspired by a photograph by of O’Connell’s reflections working with children in San Jose’s Washington Elementary School through Bronco Urban Gardens (BUG).

“When I was there on Valentine’s Day, I was talking to some of the young girls we were working with and they asked me what I was doing for Valentine’s Day,” O’Connell said. “Every week, we harvested lettuce, cabbage, broccoli, snap peas, stuff like that. When we do a harvest, if it’s a big enough harvest, we’d give it to the kids to have as part of their supper. I realized during the week after the Valentine’s Day visit that the girls and I had very different Valentine’s Days. I went to this nice restaurant in Cupertino, and I knew the girls I was working with were not going to have the same kind of dinner I had.”