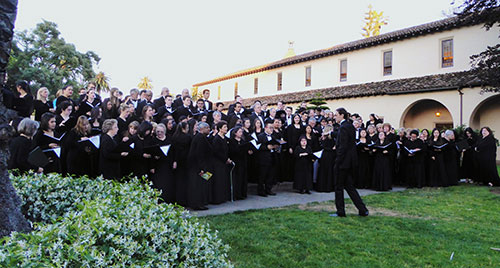 “Barbara Allen,” a 17th century Scottish story of unrequited love and its tragic consequences, has roamed the world, eventually finding its way to the Appalachian Mountains of America and, on May 12, to Mission Santa Clara on the campus of Santa Clara University. The traditional folksong was given a new and fuller voice as a classical oratorio commissioned by the Santa Clara Chorale (SCC) and written by composer Scott Gendel from Madison, Wisconsin.

The world premiere of the 70-minute oratorio “Barbara Allen” was conducted by SCC artistic director Scot Hanna-Weir, who synergized the considerable talents of about 180 members of the SCC and Santa Clara University choirs, with soloists Sarah Brailey, soprano, and Brian Thorsett, tenor. The singers were accompanied by the San José Chamber Orchestra, founded by Barbara Day Turner.

“You are witnessing the birth of a piece, although usually a birthing room is much smaller,” Hanna-Weir said to the audience in introducing “Barbara Allen.”

“It’s thrilling not only to make great music of a piece but to do so for the first time,” said Hanna-Weir. “To bring something to life that’s the product of a good friend of mine is the experience of a lifetime. We’re so excited to share this music.”

Gendel, who met Hanna-Weir in graduate school at the University of Wisconsin, explained how the folk ballad “Barbara Allen” was enriched as an oratorio.

“A folksong is a simple way of telling a story. An oratorio is just the opposite. I took aspects of both–the zoomed out view of a folksong and the close up, detailed story telling that oratorio can do, so you see both close up and far away at the same time,” said Gendel.

“I think Scott likes the challenge of a new piece of music,” said SCC Board president Ron Paradies. “He and the Board and Chorale are interested in doing what we can to perpetuate new and interesting music.”

“It was hard to sing because it was original,” said alto Elsbeth TeBrake. “We’re the first ones to sing it. We don’t have an example to follow.”

“We had to define it,” said bass Roger Medsker.

“The old monarchs hired guys like Mozart to write music, but who fosters young composers today to create new pieces of music? It’s a privilege for the Santa Clara Chorale to commission a young composer to put together a piece of work and then put together multiple choirs and an orchestra to perform it,” said Paradies.

“I’m totally blown away to have 180 performers giving all their energy and heart to this [oratorio],” said Gendel. “‘Barbara Allen’ took the entire last year of my life. It’s going to be hard to not think about it for awhile.”

The audience was blown away, too, giving Gendel, Hanna-Weir, the singers and orchestra a particularly long and loud standing ovation at the end of what is really the beginning of the new American folk oratorio “Barbara Allen.”

The Santa Clara Chorale’s free “Encore Performance” is June 4, 3 p.m., at St. Mark’s Episcopal Church, Santa Clara. The Chorale will revisit musical highlights from its 2016 – 2017 season. Visit www.scc.org for information. The nonprofit SCC, founded in 1962, is funded in part by a grant from the City of Santa Clara Cultural Commission.