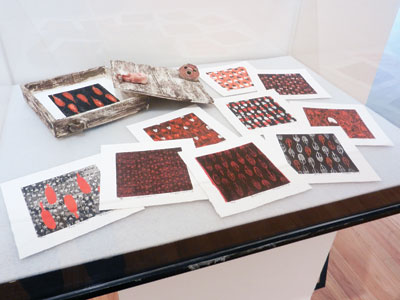 With works of art that often look like paintings and drawings, the California Society of Printmakers 100th Anniversary Exhibition is on display at the Triton Museum of Art until July 15.

While most of the images were flat, Carrie Ann Plank and Jane Gregorious made 3D pieces for the exhibition. In Plank’s “XX”, she exhibits a “relief printed book with pochoir stencils and gold leaf” to create a print looking similar to a popup book, with two raised wrens and elevated numbers. Gregorious used a silkscreen method of printmaking in her “Churches in Rows.” As the title suggests, “Churches in Rows” is a set 20 churches placed in four rows, five churches deep.

Barbara Stikker’s “Point Lobos Grove” is a linocut with monoprint entry of trees, which on first glance looks similar to a line drawing with lines of varying thickness used to create the trees and background.

Another unique piece part of the 100th anniversary exhibit is Sylvia Solocheck Walters’ “Around the Bend.” Walters created a woodcut of Bambi and friends, additional deer, flowers, and a car driving down a road. Something about the familiarity of the Disney characters along with the flowers and additional animals is quite striking to the viewer.

In addition to animals and nature, some of the prints are of people, places, and ideas ranging from straightforward to abstract.

Musicians Jackie Gage and The JurassiC