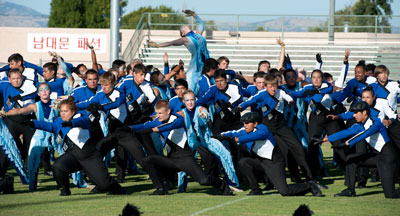 The Star Spangled Banner is played at the beginning of almost any event taking place in the United States. Over the course of a few months, it‘s quite easy to hear literally hundreds of renditions of it, with some performances standing out in one‘s mind long after the event has ended.

A performance of this traditional anthem that will be long-remembered by listeners took place on June 26, at Santa Clara High School. The Pacific Procession, part of the 2012 Drum Corps International Tour, took center stage. The teams that performed were the: Santa Clara Vanguard and Cadets; Phantom Regiment (Rockford, IL); Boston Crusaders (Boston, MA); Pacific Crest (Diamond Bar, CA); and the Blue Devils B (Concord, CA). Due to a reported noise ordinance prohibiting music after 8:30 p.m., which would prevent the Santa Clara Vanguard from performing an encore, the brass section performed the Star Spangled Banner.

Impressive is one way to explain just how good the Vanguard were with the National Anthem, but it falls far short of the emotion that seemed to literally flow out of the instruments as the band members played. Better terms include mouth-dropping and awe-inspiring. It was one of the all-time best of the Star Spangled Banner performances I have ever had the pleasure of listening to and witnessing. Given how great they were, I wonder how much better it could have been if the entire ensemble of musical instruments were to play it.

The Anthem got the show started. What followed was a dazzling display of precision that could best be described as “organized pandemonium.” Upwards of 150 people per team appeared on the field, as each team had individual sections – brass, color guard, and percussion – performing different routines as part of each team‘s competition entry. Focus your eyes on one part of the field for too long and you would miss the action taking place somewhere else. Flags, swords, and rifles were tossed and spun in the air. Huge sheets of fabric became moving canopies by the color guard, who also performed many intricate routines, including gymnastics, all while musical numbers were played by the percussion (instruments that are carried such as smaller drums and cymbals, and stationary instruments including electronic pianos, bells, bongos, xylophone, larger bass drums, etc.) and brass (any sort of wind instrument).

The Vanguard Cadets will perform in Santa Clara at the City‘s 4th of July Picnic at 2 p.m., and Great America at approximately 3:30 p.m. And, that won‘t be the only performances the Cadets will participate in that day. One part of the Cadets will perform in the Fremont parade, while the other part will be at the Redwood City parade. The Vanguard will practice in Ogden, Utah to get ready for a July 6 appearance at the “Drums Along the Rockies” in Casper, Wyoming.