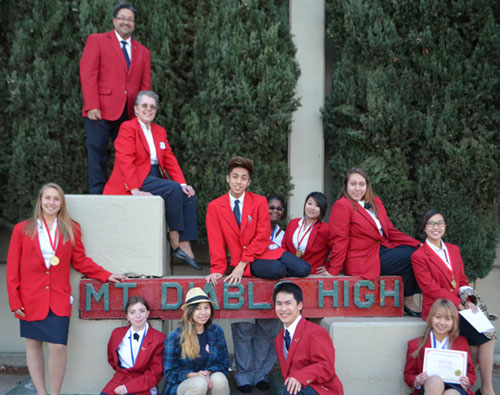 Students at Wilcox High School know they don’t need to be cast members on a reality television show, such as Top Chef or Project Runway, to participate in a cooking or fashion design competition. Wilcox students in both the culinary and fashion design programs recently participated in the FHA-HERO Competition, held at Mount Diablo High School in Concord on February 23rd. It is a preliminary event to the state competition in April. FHA-HERO stands for Future Homemakers of America- Home Economics Related Occupations.

“I had a team – Sierra Boyanich and Claire Park – they did nutrition education and they took first place,” says Chef Daniel Arias, who has been teaching culinary classes at Wilcox High School for the last six years. “They did a presentation on [a nutrition plan] for someone who has a disease. I believe it is Alzheimer’s disease. They thought about foods that offer nutrients that can combat or suppress the disease and they presented menu items.”

“There were also two other teams and both teams participated in a commercial food challenge,” Arias continues. “It was similar to an Iron Chef event. They had 15 minutes to gather their [ingredients]. The menu they had was a spinach salad with mustard vinaigrette, and grilled chicken with sauce supreme. They also made rice pilaf and simmered broccoli and carrots. This is very classic French.”

Each competing team had to prepare the same menu in 75 minutes. Terry Dulay and Monique Schmitz, who comprised one team, won fifth place. Jonathan Jiang, Joi Strickland, and Alysha Wallace, who formed another team, won third place. Students received the competition recipes a month in advance. Working after school and on weekends, the students practiced an estimated total of 60 hours to make and re-make this meal until it reached perfection.

Fashion was on the menu as well at the competition. Cathy Rubin, fashion program coordinator and home economics teacher at Wilcox High School, accompanied two of her students.

“My student, Han Luong, designed three garments to go with a Romeo and Juliet theme; she took third place,” Rubin says. “[Contestants] could take a purist and historically accurate approach with their clothing line or they could choose to modernize it, and she modernized it. She made a presentation board and chose the fabrics. She did a write-up and gave an oral explanation to a group of judges. It was really fun to see.”

“A month before the competition, we were told what the apparel construction topic would be,” Rubin continues. “Calista Huynh, my other student, made a few practice hats to prepare for this challenge; she won first place. She made an animal hat that has a side that comes down, and it has paw prints on the bottom. It’s adorable.”

While the atmosphere in culinary and fashion-themed competitions on reality television often show contestants and judges as being very cut-throat and tough, Arias says the kids were all very polite to one another, and the judges were fair.

“This is really a forum for learning,” Arias says. “I tell the kids before they go that it doesn’t matter if they win or lose – it’s that they made a commitment to do it, and they had followed through and competed.”

A Decade of Honoring the Arts at Santa Clara High School