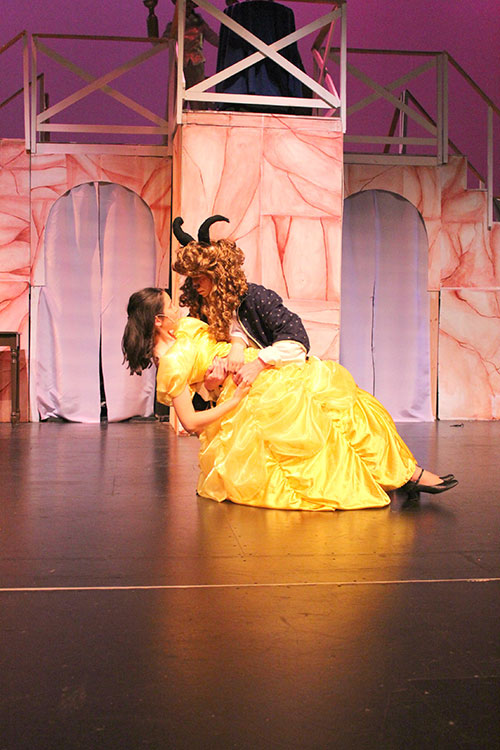 Sara Norris, 18, costume designer at Wilcox High School described how Belle’s trademark gold dress was created for the Wilcox Stage Company’s “Disney’s Beauty and the Beast,” performed May 12-14 at the Mission City Center for Performing Arts. Starting with a donated yellow top, the school’s Fashion Design department, led by teacher Mindy Trisko, added more satin, applied yellow roses, and used petticoats to shape the skirt. The dress was worn during the romantic ballroom dance between Belle and the Beast. If Belle confessed her love for the Beast, she could reverse the Enchantress’s spell and help turn him back into a Prince.

“This is primarily a student run production,” said Claire Robson, teacher and stage manager/director alongside student director Nicholas Gamber and other student crew members. “Students get to communicate with a bunch of different people, meet deadlines, take on leadership roles and show commitment to a project.”

Jessica O’Gorman, 15, played Belle, the heroine who traded spots with her gentle father Maurice (Zoey Martin) when he was imprisoned in the Beast’s castle. O’Gorman’s soothing voice came through in songs such as “A Change in Me” and “End Duet/Transformation” when Belle realized she was falling in love.

“I don’t think that love has anything to do with appearances; it’s what’s within,” O’Gorman said. “It has to do with caring about [someone’s] personality and not their looks.”

The Beast was Ben Burkhardt, 15, who admitted he played happier roles in other productions. Nonetheless, Burkhardt smoothly portrayed the troubled Beast.

“Taking deep breaths brings me into a calmer zone as the Beast,” said Burkhardt, who wore a beard and wig in his role. “My low voice also helps with bringing the anger.”

Jon Moorwood, 17, as Gaston, demonstrated convincing rage at Belle’s rejection. Hence came Gaston’s plot with the unfeeling Monsieur D’Arque (Thomas Darknell) to imprison Belle’s father and recruit villagers (such as one played by Sylvia Ou) to invade the Beast’s castle.

“Gaston is really big about his image,” Moorwood said. “If Gaston is going to choose someone to marry him, he wants someone equally attractive and that’s why he’s fixated on Belle. I’m not as big about my image as Gaston is.”

“Mrs. Potts is like the mom and caretaker of everybody [in the Beast’s castle],” Valdez said. “I like to take care of people and I’m very compassionate like Mrs. Potts. I’d like to become a doctor someday.”

Also in the Beast’s castle, the candelabra Lumiere (Laura Kerharo) flirted and socialized in a distinctive French accent, the feather duster Babette (Maya Raman) exuded passion and femininity, the wardrobe Madame De La Grande Bouche (Olivia Gonzales) stood gracefully still and the grandfather clock Cogsworth (Donald Yuhasz) bore the pretentiousness expected from one accessorized with a gold pendulum. Underappreciated by Gaston were the loyal Lefou (Lucas Staples) and the silly and hopeful girls (Juhi Bhatia, Kristia Gratil and Emily Janusz). Baring their claws as wild wolves were Jarryd Castro, Mahi Kabra, Xaviera Newman and Ayah Touni. Finally, when the beautiful Enchantress (Syrena Acuna) turned the Prince into the Beast, she warned against judging others by their exterior appearances.