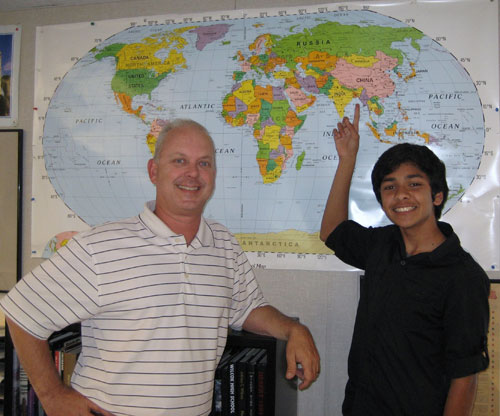 A four-week, all-expense-paid trip to Bangladesh may not be at the top of your travel list, but 16-year-old Wilcox High School junior Sufyan Abbasi can’t wait to go there during his winter school break. Abbasi, who has never traveled beyond the West Coast, is one of an elite cohort of 30 students from around the U.S. selected to participate in an American Youth Leadership Program (AYLP) in Bangladesh.

The students will see firsthand the effects of climate change in Bangladesh, which borders India and Myanmar and is the size of the state of Iowa—about 57 thousand square miles—but is packed with half the population—about 150 million—of the entire United States.

Abbasi was inspired to apply for the travel and study program after seeing a video about the 2011-2012 AYLP trip to Bangladesh, which has recently been in the news because of the garment factory fire that killed 112 workers in late November.

“It truly amazed (and concerned) me, that the decisions we’ve made here in the States have impacted the lives of millions halfway across the globe,” writes Abbasi in his online statement at www.worldsavvy.org.

“I’m really happy for Sufyan. He’s a really good kid who works hard and is very involved in school, not passive. He’s a leader on campus. There are opportunities out there, but a lot of kids don’t go after them,” says Steve Simoni, Wilcox history teacher and World Affairs Club advisor. Part of the program application process included writing a short essay about what it means to be a global citizen.

In preparation for the trip to Bangladesh, Abbasi and the 29 students he will join in New York City have been getting to know one another on Facebook and studying climate change. While in Bangladesh, the U.S. students will stay with host families. Together with local students, they will participate in service learning projects in rural villages and city slums.

Inspired by their time in Bangladesh, when the students return to the U.S., they are expected to used what they learned to create local, community-based projects to mitigate climate change. Abbasi, who is a member of the World Affairs Club at Wilcox, hopes to work with other club members to raise campus awareness about the issue of climate change.

“As an individual in a collective effort of a hard-working group of people, we can do amazing things. It starts with one person who has an ambitious goal,” says Abbasi.

“It’s very rewarding to see a student like Sufyan externalize what he has learned and try and apply it to his life in the real world,” says Simoni.

The AYLP cross-cultural exchange to Bangladesh is sponsored by the U.S. Department of State’s Bureau of Educational and Cultural Affairs and administered by World Savvy, a non-profit educational organization that engages youth in community and world affairs and fosters global competency.