Don Sr. and the late Celine Von Raesfeld raised nine children. Three of the sons — Myron, Darryl and Marty — are graduates of the fire services program at Mission College and became firefighters with a combined 70 years of fire-related services.

“The Mission College program is one of the best in the country,” said Marty Von Raesfeld, who retired in 2014.

Don Von Raesfeld Sr., himself, spent five decades working in Santa Clara. He started as Water Superintendent. Following that he was promoted to Director of Public Works and then City Manager (1960-85). After leaving City Hall, Don Von Raesfeld Sr. served on the City Council from 1988 to 1992.

David Rose, a faculty member for the Fire Protection Technology program, emphasized how valuable the partnership between the community, local businesses and Mission College’s fire program has been.

“The partnership has been beneficial to all parties and Don Sr. was an instrumental part of this with his early vision of Santa Clara and the area North of 101,” said Rose. “The area is now home to spots such as Levi’s Stadium, retail establishments, tech companies, Great America, along with homes. The area would be vastly different without Don Sr.’s input.” 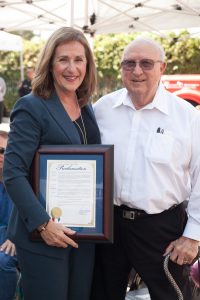 The tribute included a rescue demonstration by current Fire Protection Technology students, showing the rescue of a fire survivor (a dummy) from an upper floor.

The fire tower dedication event concluded with a christening of the building using a fire hose.