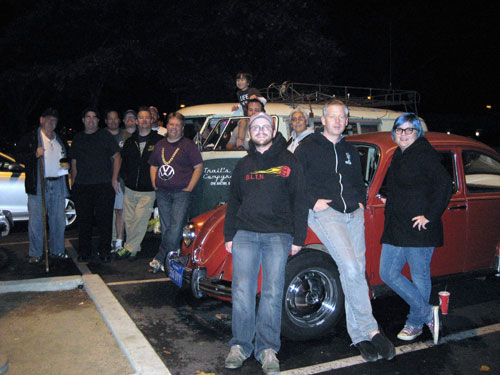 Everyone has a VW story.

“When I was a kid, my cousin Aleda took her kids and me to St. Clare School in a VW bus. I thought it was the coolest thing,” says Santa Clara resident Gary Moitozo. “Then when I was 14 or 15, my Uncle Billy drove my cousin Bill and me over the hill to the arcade in Santa Cruz on Friday nights. The smell of his VW and cigarettes as he puffed away, plus the winding road, made for a fun trip. That’s why I’ve always had a love for VWs.”

Favorite stories about the still-popular German “People’s car” are swapped every Thursday evening, rain or shine, at a Santa Clara shopping center parking lot where members of the Better Late Than Never Volkswagen Club of San Jose meet up.

Moitozo, who owns a ’72 Westfalia Camper named Fritz and three other VWs, is one of upwards from a dozen enthusiasts who gather for camaraderie that centers around what he calls “moving art that puts smiles on people’s faces.”

At the “loitering club,” everyone just hangs out, coming and going between 7:30 p.m. and 10 p.m. The club’s focus is on restoring, enjoying, and promoting late model, air-cooled VWs 25 or more years old. At a recent gathering, Moitozo demonstrated an exhaust-powered, inflatable car jack.

“Talking to people here, I learn more about the cars and where to find parts,” says Sunnyvale resident Jim Smith, who has a ’74 Thing. As the story goes, the Volkswagen company couldn’t think of a good name for the model, so they just called it “the Thing.”

“All you need is a paper clip and duct tape and you can get going in a VW,” says Santa Claran Susan Bushard, who has owned about 12 Volkswagens over the years. If you prefer an experienced mechanic to duct tape, talk to parking lot regular Adam Galaski, owner of Kirkwood V.W. repair shop in Campbell.

“A VW is one of the few things you recognize worldwide,” says Boulder Creek resident Will McDonald. “When I was a baby, sometimes I wouldn’t fall asleep until my parents drove me around in the crawl space in the back of their VW.”

“The club is like family with a common interest in cars, and they see you through good times and bad,” says McDonald, who has owned about 25 VWs.

“It’s like a social club,” says Campbell resident Jeannie Swafford. “People on the road talk to you. They say things like ‘Nice ride, man. I had one of those back in the day.'”

“We welcome anyone—whether you have a VW or not,” says Jimmy Kikuchi, who, along with Jenny James and Robert, founded the club in 2002 when a former club folded.

Parking lot potlucks take place the Thursday before Halloween and on Thanksgiving. In December, toys are collected for Toys for Tots, and club members take a Christmas lights cruise.

Eleven-year-old Saleen Hernandez from San Jose represents the next generation of VW owners. She has been coming to the parking lot meetups with her parents, younger sister, Chevelle, and brother, Manuel, since she was seven.

“I get to see a lot of VWs. My dad talks about them and how neat they are. I think they’re neat, too. I like the shape,” says Saleen. Her mom, Cheri Hernandez, drives a VW bus that her husband painted pink for her.

Swap stories at the Better Late Than Never Volkswagen Club in the parking lot outside Barefoot Coffee Roasters in the shopping center on Stevens Creek Boulevard at Lawrence Expressway. Check out the BLTN website at www.bltnvw.com or visit BLTN on Facebook.

Standing Room Only on Caltrain Leads to Expanded Service