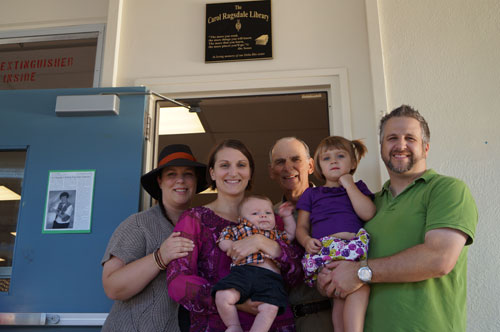 “The more you read, the more things you will know. The more that you learn, the more places you’ll go.” This quote by Dr. Seuss was engraved on two bronze plaques, which were unveiled at a library and plaque dedication event honoring the late teacher Carol Ragsdale at Sutter Elementary School on Monday, October 8.

“It’s with great honor that we hold this ceremony to dedicate the Sutter Library to Carol Ragsdale,” says Tom Funcheon, principal of Sutter Elementary School. “I can think of no better tribute to Carol’s memory as she was an avid and enthusiastic reader and writer.”

According to Funcheon, Ragsdale had worked with over 1,000 students since she began her teaching career at the school in 1965. She launched the Writing Club at the school and was a regular attendee of the school district’s Young Writers’ Exposition. She was also known for writing letters to her students to let them know why they were special.

Now it was Ragsdale’s students’ turn to point out why she was special. Funcheon read aloud comments Ragsdale’s former students in her third grade class had written about her. These comments shed light on the kind of teacher Ragsdale was- she loved math and writing, she helped students learn to like reading, she was good at arts and crafts, and she was a nice person. Students also alluded to their beloved teacher’s warm personality- she was caring and generous, she was fun and enthusiastic, and she never left anyone out.

“Carol taught for 45 years,” says Gaye Renna, Ragsdale’s friend and president of the Delta Rho chapter of Delta Kappa Gamma Society International, a women’s education organization that Ragsdale had been involved in. “Carol died on October 20, 2011 of pancreatic cancer. It’s the same cancer that Steve Jobs had. She was Teacher of the Year in Santa Clara in 1990. She became ill in 2010 and it forced her to retire that year.”

“There are now two bronze plaques at each entry of the library, now named the Carol Ragsdale Library,” Renna continues. “The plaques were paid for by our Delta Rho chapter. All our members pitched in for them. We had engraved on the plaques ‘In loving memory of our Delta Rho sister.’ The plaques also have the insignia of our pin. Carol was a devoted member of our organization. Even when she was ill, she still maintained a part-time office of vice-president with her daughter, Marlene. Marlene is a fourth-grade teacher at the school.”

Among the 50 people attending the library and plaque dedication were Ragsdale’s former colleagues, Santa Clara Unified School District superintendent Bobbie Plough, members of the West Valley College board of trustees, retired principals, and former students and their parents. Ragsdale’s family was also present.

“Carol was a kind and loving person,” Renna says. “She was very interested in writing, reading, and literacy. So it would be appropriate to name a library after her.”