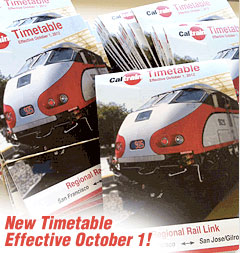 Ridership has grown consecutively for the last 24 months, according to VTA, and has reached an all-time high with an average of more than 50,000 weekday riders. On October 1 Caltrain added two new trains and restored four others previously cut due to budget constraints.

The new schedule includes “shoulder” trains – service on the edges of the regular morning and afternoon commutes – and an additional Palo Alto or Sunnyvale stop on 12 limited service trains.

Commuters have other upgrades to look forward to. A planned electrification and modernization program – planned for completion in 2019 – will enable Caltrain to offer faster and more frequent service while slicing the operating subsidy needed to run the system by half. On September 27, the California Transportation Commission approved the $40 million needed for the work.

Visit www.caltrain.com for the new schedule.

Technology, Recology and Luck Find Needle in a Haystack