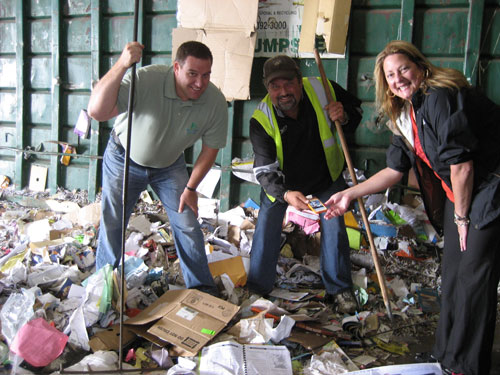 Actually, it wasn’t a needle. Technology, Recology, and luck combined to find Santa Claran Anne Hansen’s orange iPhone. And it wasn’t in a haystack.

When Hansen, a realtor who depends on her iPhone for her business, Hansen Properties, couldn’t find her phone August 28th, she called herself. No responding ring. She turned her house upside down to no avail. Her conclusion? “It must somehow have been stolen!”

Turning to technology, Hansen activated the “Find Your Phone” app on her iPad, and sure enough, the phone icon lighted up. She jumped in her car like any good detective and tracked the GPS signal to a restaurant at Bowers and El Camino.

But she no sooner got there than the satellite signal moved to a residence near San Tomas and Scott, where she knocked on the door. As she was explaining the odd situation to the homeowner, the signal moved to Home Depot at Lafayette and Martin.

Hansen resumed her chase, following the signal to 650 Martin, where it pinpointed a Recology South Bay truck loaded with a day’s worth of recycling—five tons of hydraulically-compacted paper, glass, plastics, cans, and, she now realized, her iPhone.

Technology had located Hansen’s iPhone, but Recology South Bay and luck took over from there. Normally, the truckload of recycle would have been dumped in San Jose and combined with other sky-high piles. That day, however, the truck had been driven to the Santa Clara maintenance facility for muffler work.

“It was dumb luck. Once dumped, her phone would have been in a big, huge pile at Charles Street transfer station,” says Mike King, Recology South Bay maintenance manager.

Instead, the next morning, Recology driver Tony Aranda dumped the load with Hansen’s iPhone in a separate pile at a transfer station. King, loader driver John Day, and Mark McKenna spent an hour raking through the five-ton pile of recyclables. No luck.

Off and on during the rest of the day, Day and McKenna each spent another two hours raking through the giant recycle pile. By finding out the time of day that Hansen’s Tuesday pickup took place, they could focus their raking on the logical end of the pile until, “Eureka!”—they found the needle in the haystack.

“It was an overall lucky deal,” says King. “Finding it was as lucky as its not being crushed.”

But Hansen—amazed and very happy to get back her iPhone in working order—attributes its return to more than technology and dumb luck. She credits Recology South Bay.

“Recology is more than the guys who pick-up our recycling. They are people who care when we need some help.  They really went out of their way to help me,” says Hansen. “Mike King and his co-workers are who we all want working with and for us.”

“In our industry, we get complaints and a lot of the negative, so it feels good to help somebody out,” says King.

Hansen will never know how her iPhone ended up in her blue recycle cart, but it’s not the first mysterious disappearance in her life.

“I once found my keys in my freezer after looking for them for two days,” she says.

Community
Author Cynthia ChengPosted on March 10, 2017
The Cat in the Hat, in its tall and fuzzy glory, visited Santa Clara’s Books Inc. for the store’s Read Across America Pajama Storytime....
SPONSORED