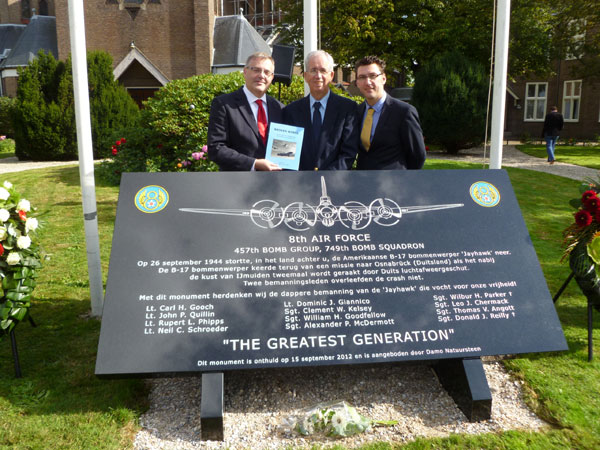 Sixty-eight years ago today—on September 26, 1944—a U.S. Army Air Forces B-17 Bomber named Jayhawk was returning from its mission in Germany when it was hit by German flak and crashed among the tulip fields of the Dutch town of Lisse, killing 19-year-old S/Sgt Donald J. Reilly of Santa Clara and one other crewman. Three others were captured by the Germans, and four were hidden by Dutch families.

Though largely unknown or forgotten in the United States, this heroic and tragic WWII event will forever be remembered by the people of Lisse and link them in friendship to America. And to Santa Clara in particular.

A black granite monument commemorating the heroism of the USAAF flight crew aboard the Jayhawk, piloted by 2/Lt Carl H. Gooch, was unveiled in Lisse September 15 at Engelbewaarderskerk, the Catholic church where Reilly’s remains were interred until returned to Santa Clara after the war.

“The ceremony was very moving. It was all I could do to keep the tears from flowing,” says Jim Riley, a Santa Clara County Historical & Genealogical Society consultant and city library volunteer. Riley and his wife, Dorothy, traveled to Lisse to represent S/Sgt Reilly’s brother-in-law, John O’Connell of Santa Clara.

The ceremony was attended by close to 600 people. These included Lisse Mayor A.W.M. Spruit; Edwin R. Nolan, charge d’Affaires of the U.S. Embassy in the Netherlands; residents of Lisse and surrounding communities; representatives from two TV stations; and 16 American family members and friends of the Jayhawk crew, who were feted like royalty by the generous and grateful Dutch community.

“It was almost overwhelming, the love that was shown. I didn’t realize how much the Dutch really appreciated and haven’t forgotten the efforts the Americans made in WWII in trying to free them from German occupation,” says Riley.

After remarks in the church sanctuary, the B-17 monument was unveiled in the garden of Engelbewaarderskerk by the wife and youngest grandchildren of 2/Lt John Quillin, the Jayhawk’s co-pilot. It was blessed by Pastor R.J.W. Franken. Two minutes of silence were followed by the singing of the Dutch and American national anthems with band accompaniment and by the laying of six wreaths.

The Royal Air Force Historical Flight group made a fly-over in two B-25 Mitchells. Erwin de Mooij, initiator of the B-17 monument project, made closing remarks, and the ceremony ended with the song “We’ll Meet Again.”

“We want to thank Erwin and all the people of Lisse who organized and supported this project financially and in so many other ways. We want to thank them for remembering our airmen in such a glorious way,” says Riley.

Damo Natuursteen, a Dutch stone works company, made and installed the B-17 monument as a gift to the community. Designed by de Mooij and his brother Sander de Mooij, the thick granite slab measures 2.2 meters wide by 1.1 meter high. On its face is a B-17 G-model bomber, flanked by symbols of the 8th USAAF, known as the “Mighty Eight.”

“I would like to thank all those who helped me, all the sponsors and everybody who keeps the memories of those who fought and died in the war alive,” says de Mooij. “Let’s never forget that war is never a good thing and that some make the ultimate sacrifice.”

Harold E. Jansen, assisted by de Mooij, researched and compiled “Broken Wings,” the story of the crew of the Jayhawk, which was part of the 457th Bomb Group, 749th Bomb Squadron. “Broken Wings” (ISBN 978-0-615-69338-5) can be purchased through CAVU Publications in Kingwood, Texas: cavupublications@gmail.com.

A further step in friendship and remembrance would be for Lisse and Santa Clara to become sister cities.