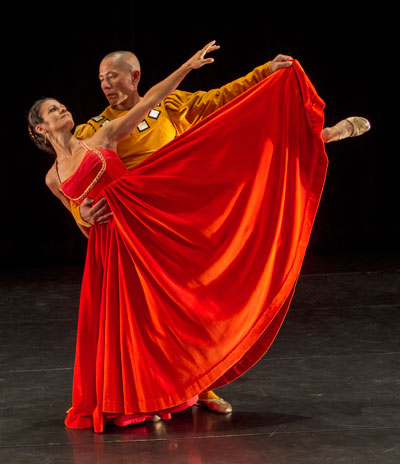 Maria Basile didn’t start out to be a dancer. The Santa Clara resident first came to the west coast from Chicago to train in gymnastics, eventually reaching the heights of world championship level in that sport. To supplement her gymnastics training, Basile took dance classes in college. “There wasn’t anything else I was interested in,” she recalls.

“I was on my way to my brother’s wedding and didn’t have time to finish the audition,” she says. “And yet, I was chosen for the company.”

It was the beginning of what’s turning out to be a life-long love for the Limon style of dance. “It’s based on such natural principles. It incorporates the technique of ballet and adds breadth and suppleness,” Basile explains.

In 2002, when ODC company member Gary Masters founded sjDANCEco in San Jose, Basile came south to join him as co-artistic director. Masters, who studied with Limon, brings the company a direct connection to Limon’s work.

But what makes the company unique, says Basile, isn’t just its history. It’s that it’s a collective of choreographers. This means that there’s a broad spectrum of work on the company’s programs, as well as “canonical” Limon works.

For example, the company’s performance this week, “Shakespeare Dances,” features Limon’s The Moor’s Pavane (1949) – Limon’s best-known work and one of the few modern dance pieces to become part of the classical dance repertory – as well as three new pieces from the company that have their inspiration in Shakespeare’s work.

“We’re a community-based performing company,” explains Basile. “We come together every week to work and train here. We’re developing together.”

And they’re working to grow the company’s roots even deeper in the local community.

On November 2 and 3, the ChoreProject Awards Concert gives local professional choreographers an opportunity to audition their work to a live audience. “The community has such a great wealth of work,” says Basile. “And it’s a great way for cultivating an audience for new works as well.”