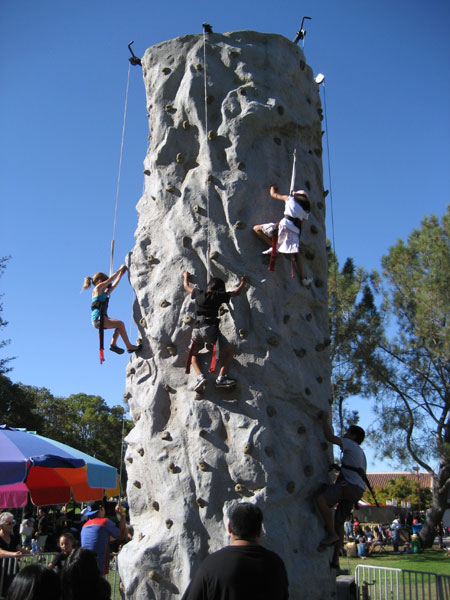 It seemed like everyone in Santa Clara was out dancing in the sun to the beat of the Spazmatics, an 80s cover band that rocked Santa Clara’s Central Park Pavilion Saturday afternoon at the 32nd Art & Wine Festival. Sunday afternoon, the popular Joe Sharino Band closed the record-setting September festival, which was attended by the biggest crowd ever.

“We love the music,” says Margaret Lavin, whose six-year-old daughter Mary was sitting on her shoulders peering above the Saturday crowd.

“You can get out with your family and friends. It’s a great community event,” says their friend Laura Backus.

Those who weren’t dancing were either lolling on the lawn, enjoying a glass of wine or beer, or listening to the music and watching the dancers from the shade of the wisteria overhanging the park’s circular outdoor pavilion.

In contrast to the pavilion frenzy, festival attendees could visit the Sahaja Meditation tent (www.sfbaymeditation.org) and take 10 minutes to center themselves for shopping.

Morro Bay artist Dan Shattuck’s tent was packed with buyers snapping up art pieces fashioned from recycled utensils: a business card holder made from a silver-plate fork, a cross made of knives and forks, a whimsical dragonfly made of knives, fork key holders, chimes.

“The city of Santa Clara does a great job of putting the show together; it’s not run by outside art promoters like so many shows,” says Shattuck. “It’s a nice family show.”

Carl and Joyce Hoffmann were sitting on the grass with their friends Elizabeth and John Corbin.

“We get a new wine glass every year, people watch, and run into friends,” says Carl.

“I really love seeing the community come together. You get great entertainment and great food,” says Steve Chan, a city civil service commissioner.

“I’m here to see that he doesn’t eat too much,” says Shirley, his wife, glancing towards Food Alley, where fund-raising community organizations sold everything from pizza and ribs to baked potatoes and fruit smoothies.

The festival wine order was increased by one third from last year and glasses once again sold out on Sunday.

“This is the funnest job in town—everyone loves a woman with a bottle of wine,” says volunteer Elise De Young pouring wine at the Santa Clara Schools Foundation wine booth.

The Schools Foundation, Police Activities League, Friends of Parks and Recreation, and Santa Clara and Wilcox High Schools Grad Night Committees each will receive a share of the net festival proceeds—$45,000 total in 2011.

“Kudos to all the people who worked really hard to make the festival a success—police, fire, parks and recreation, maintenance, residents, schools, well over 100 volunteers—and to the sponsors who underwrote much of the cost of the festival,” says Marilyn Dippell, Recreation Superintendent and Festival Coordinator.

Dippell can relax until January when the city starts planning the 2013 Santa Clara Art & Wine Festival.

The Gift of Literacy