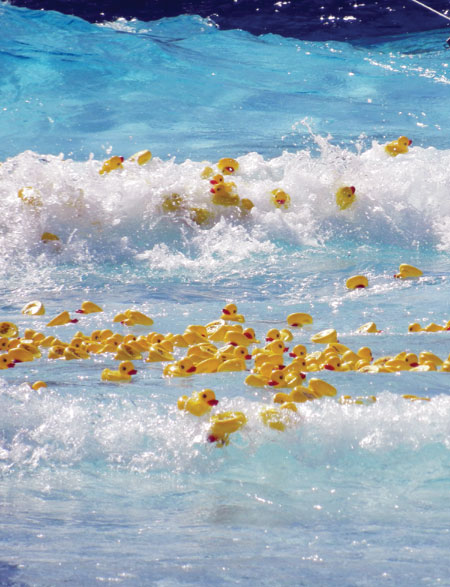 For 100 years, the Girl Scouts of the USA has been developing the future leaders of America. Young girls involved in scouting learn confidence and build character through camping, team building, and philanthropy. To honor the past 100 years and the vision of founder Juliette Gordon Low, the Girl Scouts have been celebrating throughout the past 18 months. As part of the fundraising efforts intended to make the next 100 years as successful as the past century, the Girl Scouts of Northern California held its third annual Ducky Derby at California’s Great America theme park on September 22.

“We are thrilled to be here,” said Melanie Vasilevsky, program director for Girl Scouts of Northern California. “This is our third year here, doing the Ducky Derby, and we have had girls come from as far away as Eureka. Most of them have come from Santa Rosa down to San Jose and they are here celebrating the 100th anniversary of the Girl Scouts and it’s the end of our celebration…We’re here raising funds to support our girls.”

For the first hour and a half of the event, girls were invited to participate in a “century of games,” where the most popular games of the last 100 years were available to play. From Lincoln Logs to paper dolls, jacks to Pick Up Sticks, hula hoops to Skip Its, every decade was represented and girls were given the opportunity to learn a game or activity they may have never played before. There was even an Angry Birds game set up, where girls catapulted plush birds into the green pigs made famous by the popular cell phone application.

At 10:30 a.m. waves crashed into Great America’s Boomerang Bay and over 750 yellow ducks were dropped into the water. Within minutes, the ducks traversed the length of the pool and arrived at the finish line. The “owners” of the first 35 ducks to successfully make it to the end received a prize, with the top two finishers awarded iPads. Eight-year-old Adriana Williams of Clearlake’s Troop 10670 placed second and won an iPad2, while eight-year-old Lynette Richardson of Oakland’s Troop 32362 took the grand prize of the newest version of the iPad.

“We’re really trying to bring awareness to what Girl Scouting really does,” said Vasilevsky. “We do things besides just building a girl’s courage, confidence, and character. We’re helping build the leaders of tomorrow and it’s really about how we do that. We’re just trying to bring more awareness to the overall program and what you’re getting out of it opposed to just crafts and camping – we’re so much more. We are all about skill-building and leadership skills and the confidence that they get so it’s very exciting.”

Over 600 girls and their families attended the event, which raised $10,565 and became the largest fundraiser for the 19 counties Girl Scouts of Northern California serves. To date, Great America has helped raise over $33,000 for the Girl Scouts through the Ducky Derby event.

For more information on the Girl Scouts of Northern California visit www.girlscoutsnorcal.org.

Community
Author Press ReleasePosted on December 2, 2022
As the community prepares to celebrate the season of giving, Home Instead® encourages residents of Cupertino up to Belmont to share the holiday spirit...

Community Schools
Author Diane AndrewsPosted on December 1, 2022
Sutter Elementary School teacher Shirley Stibbard’s 23 kindergarten students—and their parents—clearly love her. She has the proof. It was about 5 p.m. Friday in...
SPONSORED