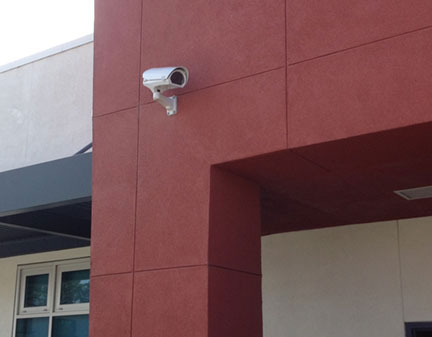 A couple of months ago, an incident of vandalism plagued one of the elementary schools in the Santa Clara Unified School District. The perpetrator was quickly identified, thanks to a video surveillance system that is being implemented in the district schools.

“I’ve come from districts where we’ve had surveillance systems, so I’m used to having them around,” says Bobbie Plough, Superintendent of the Santa Clara Unified School District. “It’s one more added security measure. Also, when the community knows there’s a surveillance system, it serves as a deterrent for crime. Word gets out that you might get captured [doing something you shouldn’t be doing] on video. This system can help us solve crimes and learn about other situations that might occur on campus.”

“The number one objective for installing the cameras is to protect our students at our sites,” says Mary Phillips, director of technology for the Santa Clara Unified School District. “For example, if there was someone on campus with a gun, the surveillance cameras will help the police pinpoint what’s going on. Law enforcement and the fire department will have access to the videos. These agencies will be able to view the footage live so they can make critical decisions.

“The vendor installing the cameras is Ojo Technology and the camera software is coming from Avigilon,” Phillips says. “If I could pick any two factors to explain why we went with Avigilon, it’s their products’ ease [and efficiency] of use. The school principals have to be able to use this. Let’s say something happened two weeks ago. With some products, it’d be really hard to go back to see the footage. But with our cameras, it takes just minutes [to retrieve footage].”

The cameras are being placed in school hallways and on the campus perimeters looking out onto the playground and driveway areas. All cameras should be visible to those in the vicinity; signs will be put up to let people know there is security surveillance. There will be no cameras placed in classrooms or other areas where students would expect privacy, such as restrooms or locker rooms.

“The cameras for the elementary schools have been completely installed,” Phillips says. “Currently, the cameras for the middle schools and high schools are still being installed. By the end of April, we expect all the schools in the district to have security surveillance. The principal at any school can choose to add more cameras as the school’s budget allows. Once you have the infrastructure in place, it doesn’t cost much to add more cameras.”

Speaking of cost, the school district secured funds to incorporate the camera surveillance system from the passing of Measure H in November 2010. According to Larry Adams, director of school bond projects for the Santa Clara Unified School District, it will cost an estimated $3.5 million in bond money from Measure H to buy and install over 600 cameras.

“The bond department administers Measure H, and they have really done a fantastic job of project management for the school district,” Phillips says.

Mission MESA Students Team Up with Cisco for Mentor Program