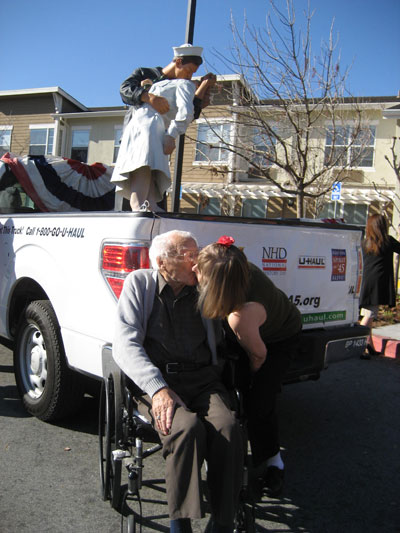 Unconditional surrender – it was a time of jubilation across America when Japan surrendered in 1945, ending WWII. Unconditional surrender—a white-uniformed nurse swept up in the spontaneous embrace of a sailor in the middle of New York City’s Times Square on Victory over Japan Day August 14, 1945. That now-famous embrace and kiss were captured in a photo by Alfred Eisenstaedt and published on the cover of “Life” magazine.

Thanks to the Spirit of ’45 organization, “Unconditional Surrender,” a six-foot high bronze sculpture recreating the kiss of that sailor and nurse, visited Pacific Gardens Assisted Senior Living Facility in Santa Clara January 12. A small group of WWII veterans and other residents came outside on the sunny day to have their picture taken with the sculpture, which arrived in the back of a U-Haul truck for its brief morning visit.

With a little encouragement, Pacific Gardens friends Edie Carl and WWII veteran Keath Marten recreated the kiss. “After all, we don’t have a lot of time left,” says 80-something-year-old Edie as she bends to kiss 90-something-year-old Keath, who is seated in a wheelchair. They are an item.

Spirit of ’45 volunteer Joe A. Gonzales accompanied “Unconditional Surrender” on its visit to Pacific Gardens. He was a staff sergeant in the US Army during WWII and remembers V-J Day.

“I was coming home and cruising downtown [in Hanford, California, south of Fresno], and people were honking horns,” says Gonzales, happy that he can still fit in his uniform after so many years and gaining five pounds.

“Unconditional Surrender” is a smaller version of a 26-foot bronze statue of the sailor and nurse that American sculptor Seward Johnson (of the Johnson and Johnson family) created as a tribute to WWII veterans. The statue installed in Times Square August 12, 2010, just in time for the 65th anniversary of the end of WWII.

The six-foot, 500-pound traveling sculpture that visited Pacific Gardens was one of three limited edition smaller sculptures that came west last August. The sculpture was loan from the Johnson Atelier Technical Institute of Sculpture in New Jersey. U-Haul donated the truck to transport the sculptures, valued at about $100,000 each, according to Robert Corpus, National Youth Director for Spirit of ’45 (www.spiritof45.org).

One “Unconditional Surrender” was dropped off in Kansas City. One was shipped to Hawaii via the port of Oakland and is at Pearl Harbor by the USS Missouri, the battleship on which the formal Japanese surrender ceremony took place on September 2, 1945, in Tokyo Bay, Japan. The third sculpture is on display at San Jose’s History Park (in Kelley Park) when it isn’t on tour around California.

“Unconditional Surrender” was brought as a thank you to Pacific Gardens for its participation in the Spirit of ’45 celebration at History Park last August. The sculpture travels to San Diego February 15th for the 2012 Spirit of ’45 National Leaders Conference.

Community
Author AdminPosted on May 16, 2012
You could call it a PowerPoint proposal. Because of it, a recent leadership meeting for Kaiser Permanente Santa Clara came to a laughing and...

Community
Author Diane AndrewsPosted on June 22, 2011
The ballroom was abuzz with energy, optimism and possibility at the Santa Clara Chamber of Commerce’s Pyramid Awards Dinner June 16 at the convention...

Community
Author Diane AndrewsPosted on November 22, 2017
Nine stories up, atop the roof of the SAP Tower of Levi’s Stadium in Santa Clara, is a thriving 7,000-square-foot organic vegetable and herb...
SPONSORED