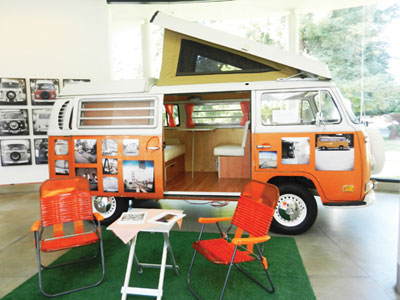 It starts when museum-goers enter the Triton’s rotunda. What they’ll find is a Voklswagen Bus, science experiment, sculpture, drawings, and video. While these have little in common, together they appear to walk the line of what is considered to have artistic value.

Yumika Tanaka went high-tech with her contribution. In her entry from the “We Are What We Wear Series,” Tanaka uses micro-controlled LEDs, fabric, thread and paper to create two giant t-shirts connected by a “highway” of fabric in which the LEDs travel through like cars on a journey.

Sara Gevurtz chose watercolors as her medium for green and red algae. She then used acrylic to create her “Macroscope Slides” and finally, in what is most likely to hop over the science versus art line, Gevurtz chose to grow algae at the Triton with “Home Grown Algae,” a cyanobacteria algae sample, water bottle, whire shelf, grow light, arline tube, air pump, and distilled water piece.

Adon Valenziano, piggy-backed off Gevurtz’s choice of basing art off science and created bronze, wood and glass sculptures of what appear to be seafaring organisms, and in some cases, sea creature hybrids.

Lu Lee went with a more traditional chalk and oil stick approach in her series of drawings – each named for a different seasonal point throughout the year. Lee also submitted two monotype and graphite images in “Let’s Go Back to the Beginning.” The images, similar to those seen during Rorschach tests, are so vague that the more one stares, the more one sees pop out of the picture.

Michelle Anna Boire chose to get creative and utilize the Triton’s television with her 16mm experimental submission, “Collecting Dolphins and Heart Shaped Rocks.” While the movie was made in 2012, the grainy footage and look of the people in the film make seem as if it was recorded decades ago.

The final artist showcased in this exhibit is Julia Weber who chose to utilize a 1971 Volkswagon Campmobile for “Mr. Orange der Storybus.” A table and chairs are placed in front of Mr. Orange and a sign is taped to “his” window stating, “Mr. Orange invites you to take a seat in the vehicle or in the chairs and listen to the stories and adventures people encountered with a VW Bus. This is an old vehicle, so please be gentle” (the bus has since been roped off). Audio pumps through the Bus and two books, “Mr. Orange der Story-Bus: From Here to There” and “In Progress” accompany the stories Mr. Orange tells. Finally, Weber framed 21 images of various VW Busses to add additional interest to her piece.

This particular exhibit blurs the lines between painting and science, storytelling and photographs, and video and sculpture, and makes a stance about how everything encountered on a day-to-day basis and everything heard is part of a larger, artistic picture. Each person is the canvas, the medium, and the form of expression.

Lift Off 2012 runs through July 15 at 1505 Warburton Avenue in Santa Clara. For more information visit www.tritonmuseum.org/exhibitions_SJSUGraduate.php.

Arts & Entertainment
Author Alissa ReyesPosted on August 30, 2017
The Santa Clara Square location of Fleming’s Prime Steakhouse & Wine Bar opened its doors on Monday. On a preview night prior to the...

Arts & Entertainment Community
Author Diane AndrewsPosted on July 18, 2018
The story of how the Retro Notes jazz band got its start is a Silicon Valley cliché. An engineer from Norway who moves to...
SPONSORED