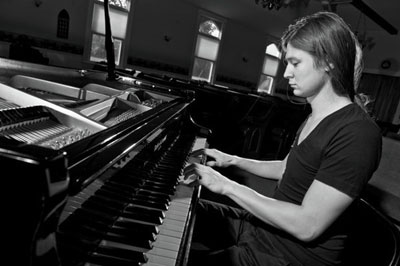 If I could only tell you one thing about young composer and pianist Benjamin Belew, it would about his improvisation of a fugue – a 500-year old musical form – on the 1946 Carmen Lombardo song “Seems Like Old Times.” The 30 year-old had never heard the song, so I hummed a few bars for him.

The unmistakably contemporary outcome spoke – or rather, sang – volumes about Belew’s compositional fusion of old and new. His music features graceful, expressive melodic lines and rhythms that keep listeners engaged from the first note to the last. On June 23 Belew will perform his compositions, as well as other piano favorites, in a concert at First Presbyterian Church of Santa Clara.

Belew likes to describe his compositional style as a “neo-classical.” He composes in classical musical forms and works with a familiar musical palette of melody and harmony. “Music has to make sense,” he says. “I don’t like abstraction. Rhythm is an important part of that, but melody is the simplest element.”

What makes his style contemporary is that he develops melodies and uses repetition in ways that are characteristic of popular music. “I’m taking these forms and using them in ways that sound familiar and appealing to modern listeners.”

A native of Indiana, the Japanese-American Belew grew up in a Navy family, moving between Japan and the U.S. In 2011, he moved to Santa Clara to be with his father. Belew is also a visual artist – his day job is as a graphic designer – and one of the many projects he’s currently working on is a graphic novel with a musical accompaniment.

Belew began studying music when he was nine; principally, he says, because his younger brother was taking lessons. It was at 15, when he was playing drums in a band, that he fell in love with classical music.

“I heard the third movement of the Moonlight Sonata. It was like double bass drums. The tempo was as fast as a rock band. That’s when I realized that classical music was exciting.” He quickly discovered the fugues of J.S. Bach through the recordings of acclaimed Bach interpreter and pianist Glen Gould; who remains one of Belew’s inspirations.

Belew’s path through the education systems of two countries was as intricate as the Bach fugues he so loves, taking some surprising turns along the way to come out right in the end.

In high school he neglected his studies to work as an animator in Japan. He was an indifferent music major in college – preferring anime to opera – until a teacher suggested he enter a state piano competition. Belew won the competition and became serious about music.

“I was told by many people when I started that it was too late – I’d hit a [technical] wall.” That wasn’t his experience, he says. “Something imaginative always leads me through the technical difficulties.”

These days, Belew is an active member of the Monterey Composers Forum and the San Francisco Chapter of the National Association of Composers, USA. He’s giving concerts and recording his music. But much of his time is spent composing – he has several commissions and is working on a piano concerto.

Most of all, he wants his work to speak for itself. “It’s not what people know about me, I want them to know the work,” he says. “It’s like finding a beautiful flower. I’m not the one who made the flower, but I’m the one who presented it.”

Arts & Entertainment
Author Larry SacksPosted on January 1, 2014
Most people generally aren’t happy to discover they have uninvited houseguests. But when that one house guest suddenly becomes a family of four, even...

Arts & Entertainment
Author Melissa McKenziePosted on March 7, 2012
Since 1962, the Santa Clara Players have been entertaining audiences with high-quality stage performances at wallet-friendly prices. Now in its 50th year, the Players...
SPONSORED