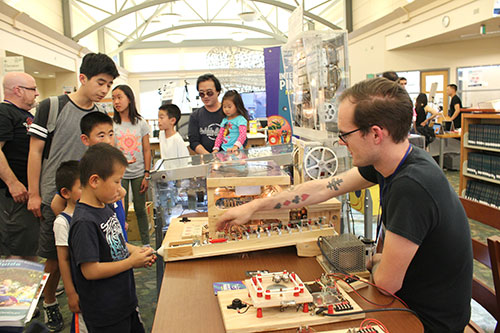 “We want to get kids interested in STEM and STEM careers,” said John Schlosser, library program coordinator for technology and event organizer. “We want kids to see the connections between the crafts and activities they worked on to STEM.”

Space travel was a theme in a number of the presentations and interactive workshops.

“[Planetary scientist] Pascal Lee was talking about the future and how we would try to get to explore and colonize Mars,” Schlosser said.

“[NASA astronaut Megan McArthur] talked about what kind of skills kids can have if they want to be astronauts,” librarian Kelly Quinn Chiu said. “You have to have a flexible and curious mind. She said that there are tons of avenues and areas of study that can bring you to become an astronaut. Megan said that in college, she studied oceanography.”

Giving papermaking demonstrations outside was Jillian Bruschera, creator of The Mobile Mill. She showed attendees a deckle (a wooden frame), the part of the deckle where the mould was (bottom part of the frame with the screen) and a vat (a rectangular case filed with water and pulp made from recycled paper, such as egg cartons).

“Paper making is a science in a nutshell; there is a recycling component,” Bruschera said. “We’re taking scrap paper, waste paper and we’re transforming them into new sheets of handmade paper. So you need a mould and a deckle and you take that and you dip it into a vat which is full of pulp and water. You pull it out and press it and dry it. And that’s paper.”

Upstairs, Kyle Spiteri, technician with the Pacific Pinball Museum, explained how skill shot baseball depicted reactions following actions. The goal of the game was to shoot balls to hit the green switches on a panel for a “home run.” Michael Schiess, executive director of Pacific Pinball Museum, talked about how he started his Alameda-based museum.

“I used to work for the Exploratorium and I built and fixed science exhibits,” Schiess said. “When I started the Pinball Museum, I realized that pinball machines are pretty robust. They’re heavy duty and don’t break. I got the idea to make science exhibits out of pinball parts. For example, every one of these devices use electromagnets and this was the technology before computers. They all use relays and relay logic was what early computers used.”

Downstairs, Chihjung Chang, 7, was using a battery to power LED lights on her craft project.

“I’m building a dragonfly made with a circuit; I’m using a pipe cleaner, tape, a Popsicle stick, and LED lights,” Chang said. “Earlier today, I played with the Kamigami Robots. You take an iPad and then you push buttons on the screen. Then my robot goes forward, backward and side to side. It was fun.”