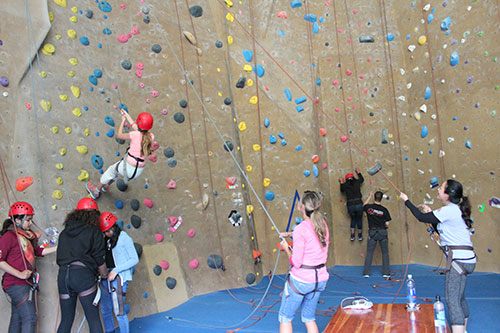 “Last year, I came to Planet Granite and I was afraid of heights,” said Dino Beslagic, 13, of his experience in Sunnyvale’s rock climbing gym with walls that go from 40 to 60 feet. “But now that I went last year and I’m here again this year, I’m not as afraid of heights as I was before. I can go higher now. I used to think a leader was someone who just told others what to do. But being in the Better Together program, I’ve learned that everyone can do something better together than just one single person.”

Beslagic was referring to the May 16 Planet Granite outing he attended with about 50 other middle school students in the Better Together Leadership Program from his school Buchser Middle School, Cabrillo Middle School and Don Callejon School. Funded by the Santa Clara City Firefighters Foundation, Better Together allows firefighters to volunteer their time to teach leadership skills to middle school students. Today Mayor Lisa Gillmor congratulated the students for being selected for the program and Deputy Fire Chief J.D. Madden affirmed the Santa Clara Fire Department’s support of the young leaders. Over 25 firefighters from the Santa Clara Fire Department volunteered and 4th St. Pizza Co. donated lunch.

“For the last 18 years, Planet Granite has donated training equipment and facilities to Better Together for events like this,” said Zach McGhie, firefighter and program coordinator of Better Together. “Today we’re doing leadership skills, communications training and trust building. It builds on a lot of things we’ve worked on with the kids through the year.”

Within an hour since her arrival, Buchser School student Serena Orr, 11, had already climbed three walls with ease.

“I had some issues getting down,” Orr said. “I learned I had to push off the wall and trust the belayers who were Beverly and [Steve Kastner]. They were holding the rope for me to make sure I didn’t fall. I learned not to worry about whether I was going to fall but just to get to the top and have a good time. I love heights.”

Also from Buchser School was Emma Coelho, 11, who had been in Better Together since she started middle school.

“Rock climbing encourages you to trust your gut instinct and to show bravery and not be scared of things like coming down from a high wall,” Coelho said.

Molina added that in addition to receiving support from the firefighters, the students also learned to support each other and cheer one another on during their climbs.

“I like the whole process of taking a group of children here who are a bit wary,” Molina said. “By the end of the four hours they’re talking about it non-stop in the van, how they want to go climb a mountain. They’re proud of themselves and feeling uplifted.”

Schools
Author Diane AndrewsPosted on November 16, 2016
Sonia Nazario remembers exactly the moment she decided to become a journalist. She was 14 years old. She was walking down a street near...

Schools
Author Alissa SorotenPosted on June 11, 2021
With one of the toughest school years behind them, the Santa Clara Unified School District Board of Trustees set their sights on how they’re...
SPONSORED