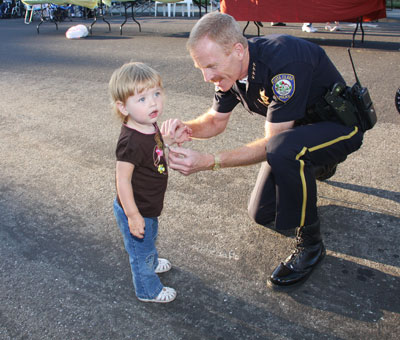 For most people on most nights, their normal routine at the end of the day is to pull into their driveways, go inside their houses, eat dinner, possibly go out to run some errands, wave at their neighbors as they drive or stroll past, return home, go inside and eventually turn out off the porch light and go to bed. However, on one night a year, that routine is changed as neighbors stay outside for what’s known as National Night Out.

National Night Out is a once-a-year event that asks residents to go outside, lock their doors behind them, meet their neighbors, keep their porch lights on and change their routine to promote unity against crime. According to the National Night Out website, the “…2010 National Night Out (NNO) campaign involved citizens, law enforcement agencies, civic groups, businesses, neighborhood organizations and local officials from over 15,000 communities from all 50 states, U.S. territories, Canadian cities and military bases worldwide. In all, over 37 million people participated in National Night Out 2010.”

Police departments around the country and right here in Santa Clara participated in NNO. It’s this participation that helps create and build a partnership, which is one of the core goals of NNO. Increasing awareness of crime prevention programs and strengthening neighborhood spirit go hand in hand with creating a positive police and community partnership. NNO focuses on creating positive public safety partnerships involving the work of both the Santa Clara Police and Fire Departments. The SCPD coordinated visits by Police and Fire units to participating neighborhoods. A motorcycle police officer, fire unit from a local firehouse, police officer with a squad car and the DARE (Drug Abuse Resistance Education) police car took time to visit the various neighborhoods participating in NNO. Santa Clara resident, Darryl H summed it up, “The only time I’d ever dealt with the police was when I got a ticket so my view of the police probably wasn’t the best. But this event helped show me that the police can be nice and friendly too – an impression I didn’t really have before. Basically, it showed me that although I might not agree that I ran that red light, the officers I spoke with tonight were just regular people too.”

Santa Clara neighborhood events ranged from grilled hot dogs to a catered meal. Police officers showed off their vehicles and let residents and children alike get a first hand view from the front or rear seat. Fire Engines 5 and 9 were available for kids and parents to get a closer look and to learn about some of the equipment on board. Many organizers said that this was the first time their neighborhood had participated and they were surprised to attract over 200 people. Other neighborhoods, such as the South Park Lane, have participated in NNO for years. According to Bruce Johnson, Board Treasurer for the South Park Community HOA, “We get a nice turnout every year, but the nicest thing is getting a chance to meet our neighbors – both new and not-so-new.”