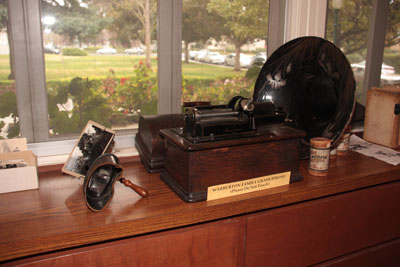 The Headen-Inman House, a 1913 craftsman-style wooden house, is situated at 1509 Warburton Avenue, near the Triton Museum. The city of Santa Clara and a local development company funded the move of the century old building two blocks from its original site in 1984.

Not only is the structure itself significant, but the history of the family that owned it is important, says Jim Narveson, President of the Santa Clara Arts and Historical Consortium, the organization housed there.

Dr. Benjamin Franklin Headen moved from Indiana by wagon train in 1852 and arrived with his family in October in Santa Clara. He bought sixty-one acres of land at the edge of town and constructed a home. Dr. Headen was among the first to plant grains and fruit trees locally.

After working on behalf of the University of the Pacific and making other contributions, as well as being a physician and farmer, Dr. B.F. Headen died in 1875. One of his daughters, Thomasine, was the beneficiary of the property after her mother passed away in 1897, and she and her husband, Louis Albertson, built a new house to replace the old one.

According to Narveson, Thomasine and Louis did not have any children, so when Thomasine died in 1934, the same house that was erected in 1913 was inherited by her brother’s daughter, Lois Headen Inman. Lois Inman passed away in 1972 and her son, Dr. Verne Inman took ownership.

Dr. Verne Inman was a prominent San Francisco osteopathic surgeon. The doctor and his wife used the house as a country home, confirms Narveson. After the doctor died in 1980, his widow Irene sold the property with the requirement that the buyer donate the house to the city of Santa Clara and agree to pay for moving it to a site that the city designated.

After the house was moved to it current site in 1984, the Santa Clara Arts and Historical Consortium leased it from the city for a nominal fee and still is doing so. The Headen-Inman House was refurbished and belongings from the original family residents were gathered, in addition to other historical artifacts. It opened as a museum in April of 1986.

In return for leasing the place, we take care of the city’s history collection there, says Narveson.

More recently, the Headen-Inman House has allocated offices and meeting rooms to local non-profit groups, like Santa Clara Sister Cities Association, which is among the more than twenty member groups in the Consortium.

Part of the downstairs floor is available for rent by the public for events. The museum section is open on non-holiday Sundays from 1 pm to 4 pm. Admission is free.

For more information, to make a tax-deductible donation, or to inquire about becoming a much-needed volunteer, call Jim Narveson: (408) 296-4481.

Bunnies and Brunch at JW House