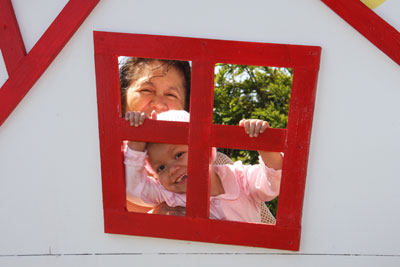 Rain pelted the ground last Saturday causing many to rethink their weekend outings, but by Sunday, the clouds had cleared and the sun began to show itself. Families were able to get out into the community and enjoy their time together. It became the perfect setting for the first ever JW House Easter egg hunt and brunch.

The event, which the JW House staff and board of directors decided to do eight weeks prior, “was the culmination of our fund committee and president, Andy Kryder, looking to get more presents so we opened it to past guests and the community,” said Jill Mitsch, Executive Director of JW House.

At 11 a.m. guests began to arrive. For the modest fee of $20 for a family of four, attendees were able to feast on a breakfast of mini muffins, coffee cake, fruit salad, eggs with broccoli, mushrooms, shallots and cheese, pancakes and bacon.

After everyone was finished eating, the Easter Bunny made an appearance and each child was given the opportunity to have his or her photo taken with the guest of honor.

As soon as each photo was taken, JW House event staff, including a group of volunteer employees from EBay, rounded everyone up.

“I’d like to thank everybody for coming today, especially the sun,” said Mitsch who went on to thank the committee, staff and everyone who helped put the event together. “We decided to do this event eight weeks ago…and we just love sharing JW House.” Mitsch then premiered a short, informational video on what JW House does.

The video had information from Mitsch, Kryder and the story on how the house came to be from JW’s mom, Anne Marie Knape-Asnong. The most touching moment came when, as part of the video, former guests gave testimonials. Allison O’Kane, a three-year-old girl stricken with cancer, and her mother came onto the screen. As Allison’s mother spoke, the video’s sound was immediately drowned out because one of the girls watching started yelling at the screen. Within moments, everyone watching began to laugh. It just so happened that the little girl yelling, “Hi Mommy,” and rapidly waving her hand at the television screen was, in fact, Allison herself.

While the video was being played, volunteers carefully hid Easter eggs around the home’s backyard. When the video ended, the children were given instructions to take no more than six eggs each. Also hidden outside were nine golden eggs, which, instead of containing candy, were filled with a small piece of paper entitling the winning child to a larger toy prize.

The remainder of the afternoon was spent enjoying candy, slices of the bunny-shaped carrot cake, and creating crafts at the four stations outside. “We will definitely do it again,” said Mitsch. “Response has been huge and it’s so great to have families here having fun and celebrating JW House.”