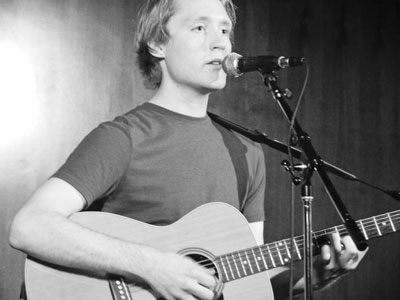 On a Saturday night in February, Kevin Mason Hull talks to his friends for a few moments at Red Rock Coffee in Mountain View. The golden-haired singer-songwriter dressed in a red shirt and black skinny jeans then walks up to the stage, grabs his guitar, kicks off his shoes and begins playing his Red Roses Trilogy of songs. It’s beautifully haunting. Hull’s voice is tender and emotional and yet, his music is not just about matching lyrics to melodies; it’s about creating imagery.

“I like the idea of using a metaphor without setting it up as a metaphor so you’re not saying, this thing is like that thing, you’re just making it that thing,” said Hull. “In the Red Roses Trilogy of songs, the kind of seed for that song is comparing bloodshot eyes to roses. But, instead of making that comparison I just start out singing about red roses and let it be what it is.”

When writing music, Hull chooses to not rely on traditional rhyme and tempo. His word emphasis may be at the middle of a sentence and his songs often start off slow and spring into a louder, emotional part before slowing back down and starting over again. Listening to Hull sing is akin to riding a musical rollercoaster.

“One of my biggest musical influences is Elliot Smith,” said Hull. “I like him because he’s melodic and wrote really intriguing melodies that were original and creative and he’s also a very sensitive lyricist so I like that a lot…I like to write longer, melodic phrases that use more dynamic shift and tempo shift than you would have in popular music. I think that’s from listening to classical music. I like classical music a lot – and poets also. I’d have to say Vincent Millay is my favorite poet and I love Sylvia Plath. I just like imagery and I think it’s missing from music. Like if you listen to the radio, everything is a bit straightforward because they’re going for that immediate reaction and it’s not, you know, really beautiful, interesting language, and interesting word placement to bring you back again and again. I also studied theater for a little while so I think Shakespeare and Tennessee Williams and all those great playwrights are kind of an influence on me just in the style of word play and really looking for balanced phrases. They all inspire me a lot.”

Influenced also by dreams, his friends, and commedia dell’arte, Hull chooses to play with texture in his music and there is a uniqueness to his sound. He claims his cat, Kensington, is an influence as well. “I’m a freak for cats,” said Hull. “I feel like they’re weirdly appropriate for what I do. You can see almost all human emotions in cats…and I think it’s interesting to draw parallels between humans and cats.”

Hull plays at Mission City Coffee (2221 The Alameda, Santa Clara) March 31 with a group he has put together, Purveyors of Whimsy. For information the show visit http://purveyorsofwhimsy.tumblr.com/ and for information on Hull’s music visit http://www.kevinmasonhull.com/. Hull also works with the Creative Artistic Theatrical Showcase (C.A.T.S.) program run through the City of Santa Clara. He will teach two classes this summer, Camp Commedia and Camp GLEE Club. For information visit http://santaclaraca.gov/index.aspx?page=239.