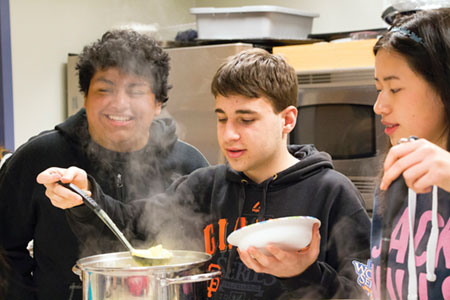 Two young girls wait for a soup kitchen to open and shiver as the cold night air rolls in. The meal, soup and a slice of bread, will be the only thing they eat. They’ll sleep in a tent or cardboard box with all of their belongings shoved into a corner. They won’t have cell phones or cable TV to keep them company. The girls only have the clothes on their back and a few miscellaneous items – nothing like the warm home and room full of electronics they left behind. They are homeless.

These girls are lucky though. In the morning, they’ll return to their families, stocked kitchens, and warm beds with a better understanding that many do not have the same luxury; and that those teens will go another day with scant food, improper housing and few personal items.

The experiment the two girls and 33 other St. Lawrence Academy students participated in was Cardboard Box City, an event that took place Jan. 31-Feb. 1. The challenge: spend one night, outside, without the comforts of home. Cell phones and electronics were prohibited, and snacks were confiscated. Each student learned that being homeless isn’t easy and often isn’t a matter of choice, but uncontrollable circumstance.

“It’s hard to sleep,” said junior Zac Blackburn, “so I understand what they have to deal with it every night…I would never want to live like that.”

In years past, students slept in the warm campus hallways, not the frigid January weather. This year, however, the event moved outside and contained an educational aspect, which came in the form of Juan Hernandez and Danae Cox of the Santa Clara County Department of Alcohol and Drug Services (DADS) and Bobby, 20, who declined to provide his last name. 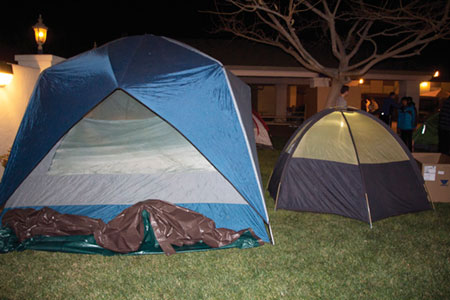 Bobby asked that each student take off their jackets to feel what it’s like to truly be cold. And, as the teens sat in their thin t-shirts while temperatures quickly dropped, they listened to Bobby’s story.

Bobby was born to addict parents. He spent his childhood living in homeless camps and hoping that his friends at school didn’t find out where he lived. Bobby dropped out of high school to care for his younger siblings – making sure they were fed and bathed. There was little hope for his future, but he dreamed of more. Eventually, Bobby was able to get his G.E.D. and a job at a pizza chain, where he worked his way up from dishwasher to assistant manager. Recently, he received housing assistance, and last week, Bobby celebrated his birthday. For the first time in his life, he was able to do it in a place he could call home – a modest apartment he shares with his two younger brothers, grandmother and pit bull, Rosie, who he credits with providing him companionship and protection out on the streets. “I never gave up,” he said. “Never have I gave up. Throughout my entire time of living this way, I have stayed away from drugs. That was one of my big successes – staying away from that environment.” Most importantly, Bobby plans to attend college to become an auto mechanic. He also left the students with some advice. 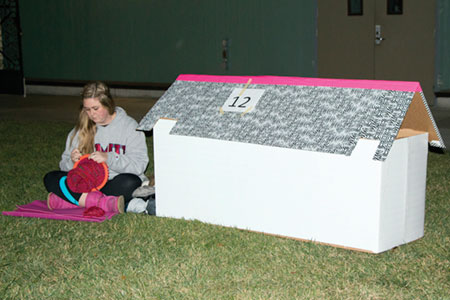 “The next time you guys see a homeless person, don’t be scared to go up to them. If they ask you for a little bit of change, don’t be selfish; don’t be greedy. Everybody needs some help, but not everybody is willing to ask for it. Sometimes you have to be the one to go out there and give help. Some people have lost their spirits. Some people have lost their hope and that is just what kills me to see.”