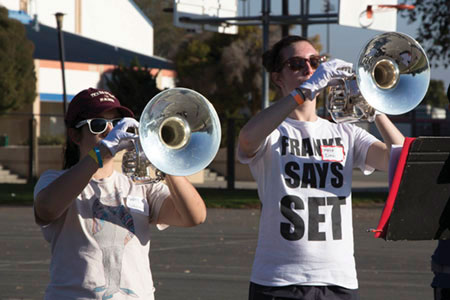 It takes hours of practice, multiple auditions, and dedication to make it as a member of the Santa Clara Vanguard. The non-profit drum and bugle corps, now in its 37th year, searches for the best of the best in brass and percussion to compete at an elite level.

Those who make it will be required to pay a hefty corps fee ($2,250) to help offset expenses and live with the corps for the season (May-August). But, corps members gain the experience of a lifetime. They travel the country (over 15,000 miles each summer), make friends, and get to share their passion with the nation. The desire is there, but it’s up to the judges to find out who fits best with the corps’ vision for the season.

After holding initial auditions in Houston, San Jose, Pasadena, Indianapolis, and Dallas, the top 168 contenders convened at Independence High School in San Jose Jan. 17-19 for a final audition and to find out their fate. No spot is guaranteed. Members from previous years sometimes falter, and rising stars are ready and eager to take their spot.

First-timer Malia Zinn, 18, a Las Vegas native going to school at University of Oklahoma, auditioned in Dallas for one of the 12 mellophone spots in the corps. Her audition impressed the judges and she was awarded an orange wristband, meaning she was almost guaranteed a spot. However, her audition in San Jose would determine if she would be marching with the corps. 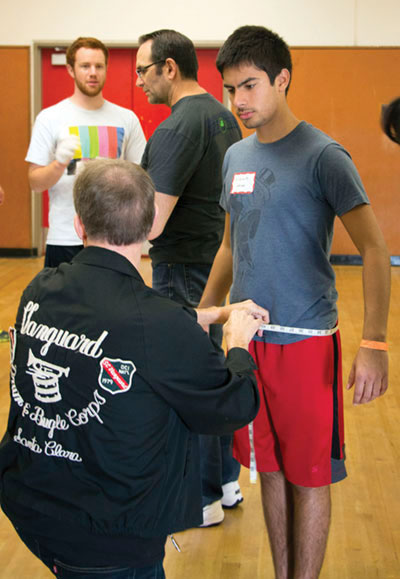 Zinn recalled being “terrified” at her first audition, which saw 202 people – corps and color guard – battle for the opportunity to move on. When the news came on Thanksgiving Day 2013 she was ecstatic that not only she moved on, but that she was one” of the top mellophone players.

“I just have to not lose my spot,” she said. “It’s still a little nerve wracking. It’s not as bad as the last time because now I’m like, ‘I have a spot. I’m not battling for my spot,’ but it’s still scary because you’re not guaranteed. You never really are, I don’t think.” 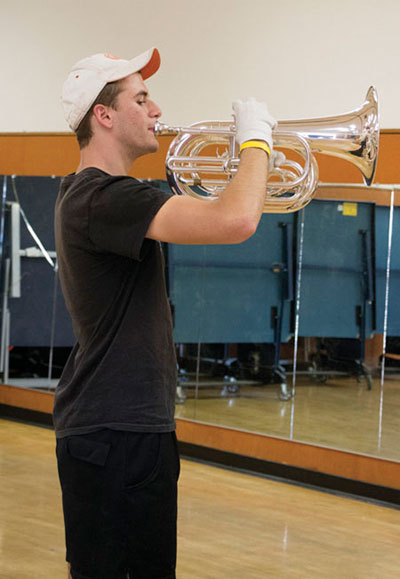 Likewise, Santa Clara resident Chris LaPlaca, 18, who marched with the Vanguard Cadets for three years, auditioned for the corps as a baritone player for the first time. LaPlaca, a graduate of Wilcox High School and current student at UC Santa Barbara, received a yellow wristband. His spot was not as solid as Zinn’s, but his skills were good enough to warrant moving forward in the process.

“It was nerve wracking, but having been in the cadet corps for three years I felt pretty comfortable [at the first audition],” said LaPlaca, who was happy to get a callback. “There are 18 returning members in this baritone section, and there are 24 total. Seventy-five people auditioned on this instrument so I’m feeling good just being this far.” LaPlaca hoped his confidence and desire – along with the practice time he put in – would help him win a coveted spot.

Results were almost immediate and, by the end of the weekend, Zinn and LaPlaca knew if they had made the cut. As it turns out, Zinn will be marching with the “A” corps. LaPlaca, on the other hand, was one of the 55 callbacks who did not receive a spot. He intends to march with the Cadets this season.